Taoiseach Leo Varadkar has ruled out forming a coalition with Sinn Fein and has believes it could be "a number of months before we're in a position to form a government". 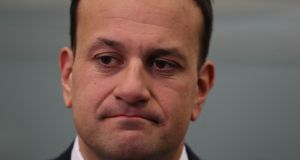 Fine Gael will “do its duty” and lead the Opposition if it cannot form a government, Taoiseach Leo Varadkar has said.

In such a scenario he would seek to stay on as leader of Fine Gael but “that will be a matter for my party.

“I hope they’ll keep me on but if they don’t I’ll stay here and represent the place I grew up, the people who supported me.”

Mr Varadkar said he will talk to other parties including Labour, the Social Democrats, the Green Party and Fianna Fáil to see if there’s a possibility of forming a government.

However, he said it should be a government with a working majority and he is prepared to go into Opposition.

Speaking to Sky News he ruled out going into government with Sinn Féin even if it meant he would no longer be Taoiseach.

He said: “What matters first and foremost is not me, it’s the country. It’s also the party thereafter.

“If Fine Gael has to do its duty and lead the Opposition we’ll do that.

“And as has always been the case in Irish history if the country needs to turn to a party to pick up the pieces when the experiment goes wrong we’ll be there.”

Mr Varadkar said his biggest regret was there wasn’t more time to show results in housing.

“We have a housing crisis but just in the last few months we’ve started to see house prices level off and the number of people homeless going down and rents falling for the first time in seven years.

“I know from experience that people don’t really feel that or see that in their own lives until its been happening for a year or two and that’s my regret that we didn’t have enough time on issues like housing.”

The Taoiseach was elected on the fifth count after Sinn Féin’s Paul Donnelly topped the poll.

In Cork, Simon Coveney stressed it was too early to make any conclusive comments given so many seats have still to be filled but he re-iterated Fine Gael's  opposition to any deal with Sinn Féin,

However, the Tánaiste said they were open to coalition with Fianna Fáil.

“I think you are going to see quite a long and extended process of discussions between political parties before we know what the next government is going to look like,” said Mr Coveney, arriving at the Cork South Central count centre.

“The Fine Gael position [on Sinn Féin] was very clear during this campaign and I think people voted for us on that basis and we’re not going to be changing our position – Fine Gael will not be going into government with Sinn Féin.

“Sinn Féin do have a significant mandate and of course we respect that vote but that’s a different thing to trying to put a government together that can last and that’s compatible and make decision for the country in a coherent way.

“I don’t think that [a Fine Gael and Sinn Féin] government would work.

Housing minister Eoghan Murphy said that Fine Gael’s and Sinn Féin’s policy platforms are “miles apart from each other”.

“I don’t see where you can bridge that,” he said

Speaking at the RDS in Dublin, he added: “Just from the basic point of the economy, the proposals they have would take us backwards.

“What I am disregarding are the proposals that Sinn Féin have put forward in their manifesto.

“Proposals that would tax workers, tax investment and tax jobs and would keep us from investing in public services which we need to do.

“It’s not about the voters and the people who support Sinn Féin, it’s about the very populist proposals they put forward and I don’t see how they are compatible with the responsible approach that Fine Gael took.”

However, Fine Gael’s Simon Harris has said his party is still willing to talk about a grand coalition with Fianna Fáil.

While the party’s first preference was to form a government with other parties such as Labour and the Greens, Mr Harris said a coalition with Fianna Fáil was still an option.

“As a last resort, in the national interest, Fine Gael would seek to talk about forming a grand coalition with Fianna Fáil,” he said.

“It is regrettable that the Fianna Fáil leader has ruled that out. Perhaps he thought it would be electorally advantageous to do so. It clearly hasn’t turned out to be the case. It is now a time for calm heads and for a lot of talking.”