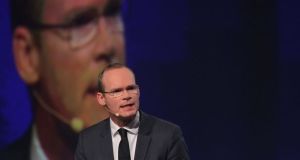 Minister for Agriculture Simon Coveney: Fine Gael wants to lead the government but not at any cost.

Minister for Agriculture Simon Coveney has not ruled out supporting a Fianna Fáil minority government as negotiations continue on the formation of a new government. His comments put him at odds with party colleague Leo Varadkar who said there is “no way” Fine Gael would back a government led by Micheál Martin and including Independents and smaller parties.

Asked if he would support a Fianna Fáil minority government Mr Coveney said:

“I’m not making any absolutes today. We’re in a process at the moment, and that process from a Fine Gael perceptive is about putting together a partnership or a coalition of parties that can provide stable government,” he said ahead of a meeting of EU agriculture ministers in Brussels.

“Fine Gael wants to lead that, but not at any cost obviously and so we’re in that process at the moment of speaking to smaller parties and speaking to independents and working with them to see if we can put something solid together.”

Mr Coveney, who is seen as a possible future leader of Fine Gael, said there was “no talk about leadership in Fine Gael at the moment”.

“The sole focus is on supporting our leader, being strong and unified within the party, to try and put a coalition of interests together that can run the country,” he said, adding that, without a stable government a lot of the progress that was hard earned over the last five years could be lost in the next few years. “We need to make sure that that doesn’t happen.”

Asked about Sinn Féin’s call for the establishment of an Independent Commission on the best way to deliver water services, he said he was against the idea, adding that he did not know what the Sinn Féin position on water charges is. “I don’t really understand what Sinn Féin are actually calling for here. My understanding was that Sinn Fein wanted to abolish water charges and Irish Water; they’re now calling for a commission to look at this, so I don’t know what their position is – are they in favour or are they not.”

Dublin Mid-West TD Eoin Ó Broin told RTÉ’s This Week programme on Sunday that the party believed that an independent commission could examine the “best possible model of public ownership”.

Mr Coveney said Ireland would not support any measures by the EU to introduce milk supply controls at today’s meeting of EU agriculture ministers, noting that a voluntary proposal may be on the table. Ireland would not participate in such a measure he said.

France has been leading calls for the European Commission to intervene to deal with the fall in milk prices.