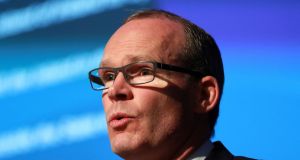 Minister for Housing Simon Coveney has expressed his confidence in Garda Commissioner Nóirín O’Sullivan amid renewed calls for her resignation over comments she made at a meeting of the Dáil Public Accounts Committee (PAC).

His comments follow Tánaiste Frances Fitzgerald’s backing of the commissioner on Friday.

The latest controversy arose after a meeting of PAC this week which discussed financial irregularities at the Garda training college in Templemore.

John Barrett, the Garda’s director of human resources, and a civilian officer, said he held a two-hour meeting with Ms O’Sullivan in July 2015 to discuss the issue.

Ms O’Sullivan said, however, there was a “brief” exchange over a cup of tea.

Mr Barrett also said there was a “culture of circling the wagons and I was banging into the wagons”.

Ms O’Sullivan has insisted that “under no circumstances” did she mislead the committee.

Speaking on Saturday, Mr Coveney said he thought there was a tendency when things were going wrong “to call for a head thinking that’s going to solve everything”. It would not, he said.

Speaking on RTÉ’s Saturday With Claire Byrne programme, Mr Coveney acknowledged Ms O’Sullivan was dealing with very serious issues, such as the Garda whistleblower controversy, the penalty points issue and the financial irregularities alleged at Templemore.

He said, however, the commissioner had to be judged on how she dealt with difficult issues when she heard about them.

Mr Coveney said Ms O’Sullivan had been appointed in a competitive process, which was the first ever such process for the post. All of the questions about how she would deal with issues had to be answered by her when considering whether she was the right person for the job.

Mr Coveney said the “change process” within An Garda Síochána had to happen but that the commissioner needed to be given support in trying to do that.

He said he would be briefed at Cabinet next week on the issues. He had read what was said at the PAC meeting but obviously had not been sitting in the room.

Sinn Féin TD David Cullinane said on the same programme the commissioner had known about the Templemore issue since 2015 “and sat on her hands as far as I can see”.

People Before Profit TD Bríd Smith said she believed Ms O’Sullivan should go but that she did not think the problem stopped there.

She said there was a “culture” within An Garda Síochána and that “a lot of people should go”.

A complete reformation of the force was what was required.

Ms O’Sullivan has been urged to step down by Fianna Fáil, although its justice spokesman Jim O’Callaghan said his party would not table or support Dáil motions of no confidence in the commissioner.

“The Taoiseach and the Minster for Justice persist in refusing to hold the Garda Commissioner to account,” he said.

“There are numerous examples of this and there is no rational explanation of their refusal to seek the commissioner’s resignation.”

Mr Adams said the majority of parties in Leinster House now wanted the commissioner to go.

“Apart from the latest controversy over the presentation to the Public Accounts Committee, I remain very concerned about the refusal of the Taoiseach to act on the detailed information I gave him 18 months ago about the killing of Garda Tony Golden and other issues arising from that dreadful event.