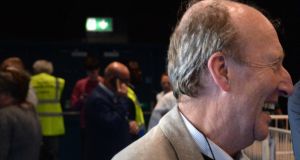 Minister for Transport Shane Ross at the North Dublin count centre in the RDS Dublin: his home was targeted by a peaceful protest group. Photograph: Dara Mac Dónaill

Two close allies of Minister for Transport Shane Ross were among the casualties of the local elections in Co Dublin.

Mr Ross is also a supporter of Independent candidate Deirdre Donnelly who was elected in Stillorgan on the eighth count on Sunday.

Meanwhile, on Sunday, Mr Ross’s home was targeted by a protest group that has previously gathered outside the home of Minister for Health Simon Harris.

The Fingal Battalion Direct Action Group, which numbered four members outside Mr Ross’s home in Enniskerry, Co Wicklow, made a statement while standing at the locked gates of the property.

Mr Ross posted a message online confirming the protest but added that it had been peaceful.

A man who read the statement on behalf of the group said Mr Ross had run for election claiming to be an anti-establishment candidate, “only to jump into bed” with Fine Gael to become a minister in government.

Most adults have never considered where they want to be cared for 09:58
Storm Dennis washes abandoned ‘ghost ship’ onto rocks off Co Cork 09:45
Wet and windy weather: ‘no respite ahead,’ says Met Éireann 09:21
Man dies in apparent accidental shooting at Dublin firing range 06:42
Coronavirus: Irish passengers trapped on cruise ship in Japan set to be evacuated 06:00
SUBSCRIBER ONLY