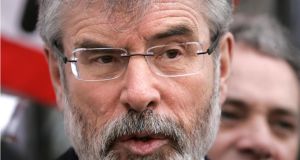 Gerry Adams: he said while he could understand Lord Tebbitt’s antipathy towards republicans, the remarks were “shocking”. Photograph: Dara Mac Dónaill


Sinn Féin has denounced former Conservative chairman Norman Tebbitt for saying he hoped Martin McGuinness would be shot by dissident republicans after attending the state banquet with Queen Elizabeth on Tuesday.

Lord Tebbitt, a close cabinet colleague of the late Margaret Thatcher, said in a radio interview: “There’s always the possibility that a member of the Real IRA will be so outraged by Mr McGuinness bowing to the queen that they might shoot him in the back for it. We can but hope.”

Lord Tebbitt and his wife were seriously injured in an IRA bomb attack on the Grand Hotel in Brighton in 1984 during the Conservative Party conference. Thatcher, the intended target, was unhurt, but five died and 31 were injured.

Lord Tebbitt said he believed the queen had no choice but to invite Mr McGuinness to the state dinner. The remarks were denounced by Sinn Féin. Party president Gerry Adams said while he could understand Lord Tebbitt’s antipathy towards republicans, the remarks were “shocking”.


Conflict victim
“I fully understand that Norman Tebbitt has himself been a victim of the political conflict and I regret that he has suffered grievously,” Mr Adams said. “However, to publicly advocate the assassination of Deputy First Minister Martin McGuinness is a shocking throwback to a violent past from which we are seeking to move on. The state visit is another important milestone in doing that.”


Dealing with past
He said the remarks by Lord Tebbitt were “another clear example of why the issue of the past needs to be dealt with as a political priority”.

“Martin McGuinness is a leader of political and personal courage who has worked tirelessly to ensure the success of the peace process and the cause of reconciliation between unionist and nationalist, and between Britain and Ireland, at considerable risk to himself,” Mr Adams added.

“Martin, his home and indeed his family have been targets for abuse and attack by so- called dissident republicans.

“To now have this type of activity encouraged by a member of the British House of Lords is unacceptable, and should be rejected by all right-thinking people.


Stout defence
“Political leaders on both sides of the Irish Sea should reject the sentiments expressed by Mr Tebbitt.”

Mr McGuinness has stoutly defended his acceptance of the queen’s invitation to the state banquet held in honour of President Michael D Higgins. He added he had no qualms joining in a toast to the queen and standing for God Save The Queen .

The queen had been willing to show “impressive leadership” in conflict resolution.

He said he believed he had the “overwhelming support of the people of Ireland” and vowed to continue working to build the peace process.

“I have been given a very important job to do on behalf not just of the people of the North who elect me . . . but I believe the overwhelming majority of the people of Ireland want to ensure that the peace process continues to move forward.”