‘Hundreds of jobs across the retrofit industry are now at risk,’ says contractor 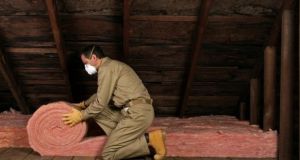 The Sustainable Energy Authority of Ireland (SEAI) was aware that funds for its deep retrofit scheme were running out but continued to encourage applications up to last month’s closing date even though there was no prospect of these projects receiving a grant.

A spokesman for the authority yesterday conceded that it was aware since the second-quarter of the year that it did not have the funding to commit to all the projects. Contractors involved in the scheme alleged that the situation would have been known to SEAI in March or April.

The authority announced on Tuesday that it would give grants to carry out deep retrofits of older housing to improve their energy rating only to projects which had already been approved.

The decision by the authority and the Department of Communications, Climate Action and Environment not to inform applicants that no further funding was available was described as a “political cover-up” by Labour TD Alan Kelly.

More than 300 homeowners, some of whom have already begun work and spent tens of thousands of euro, will not now receive the grants that would have covered half the cost of the work.

Paul Kenny, of the Tipperary Energy Agency (TEA), said the fact that “the funds would be exhausted in March or early April” was not communicated “leaving people to continue to develop projects in good faith”.

Paddy Phelan, of the Kilkenny-based Three Counties Energy Agency, said “hundreds of jobs across the retrofit industry are now at risk”.

Mr Kelly said the authority’s then chief executive, Jim Gannon, told an Oireachtas committee early last month that the scheme was still open for applications, when the funding issues should have been apparent.

Sinn Féin TD Pearse Doherty asked in a parliamentary question on June 27th if the scheme had run out of money and Minister for the Environment Richard Bruton suggested it was fully funded and proceeding as normal.

It is understood the SEAI made a submission to the department in June outlining five options, including extension of the scheme into next year. All were rejected. Despite a doubling of the budget to €10 million this year, only 91 houses will be retrofitted, compared with 139 last year and 120 in 2017.