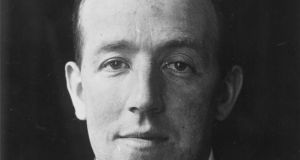 Russian jewels smuggled into the US and later hidden in a Dublin chimney breast sounds like the plot of a spy movie, but newly-released State files show it really happened.

The papers show that Harry Boland, a close associate of Michael Collins, received four jewels from a Russian envoy in April 1920 as collateral for a $20,000 loan he gave to the Russians on behalf of the Irish Government. Under the agreement, the jewels would be returned when the loan was repaid.

Boland brought them home and gave them to Collins, but in the course of a heated discussion about something else, Collins threw them back at him, saying they were bloodstained.

Boland brought them home to his mother’s house in Marino, where they were hidden in the bottom of the stove in the kitchen. It was summer so the stove was not lit, but when winter approached, they were moved and hidden behind a brick above it.

The issue resurfaced in 1988 when Boland’s niece Eileen Barrington sought the help of the Department of Foreign Affairs to trace the whereabouts of the Russian jewels so that she and her sister may finally see them.

Asked by The Irish Times about the events, Mrs Barrington, who is now 90, said she had been interested in travelling to Russia to see the jewels but tracking them down proved impossible.

Her mother Kathleen was Harry Boland’s sister. When he had been shot and lay dying in 1922, he told his mother and Kathleen to keep the jewels until Éamon de Valera returned to power and the Republic was established. They did this, handing the jewels to de Valera in 1938.

The file documenting the affair contains the letter from LK Martens, representative in the United States of the Russian Socialist Federal Soviet Republic, acknowledging receipt of the $20,000 loan.

Selling them at Christie’s

The memo said the minister for finance was considering selling them at Christie’s without disclosing the government’s interest in the transaction, but also wondered if the Russians should be given a chance to get them back by repaying the loan.

But there was a twist – the jewels were not as valuable as first thought. A memo for government in 1948 notes they were valued by a leading firm of London jewellers and by Christie’s. “The former valued them at about £2,000 and the latter at £1,600.”

It was decided to seek the money back from the Soviet embassy. In August 1949, the USSR embassy wrote to the Irish High Commissioner in London, noting that, while “this transaction has not been done in the proper way”, the Soviet government recognised the loan and would repay the $20,000.

A letter from the ambassador of the USSR acknowledged the return of the jewels: “Received this 13th day of September, 1949 from the Government of Ireland, through his Excellency the High Commissioner in London, four Russian jewels on my repayment to the Government of their loan of twenty thousand Dollars,” he wrote.

Mrs Barrington grew up in the Marino house but she knew nothing about the jewels until they were mentioned during an election campaign in 1948. She read about them in the Irish Press, which was posted to her when she was au-pairing in France. She wrote home to express her indignation at not being told this news and her mother replied she might well have traded them for comics if she had known about them.

“And she was probably right,” Mrs Barrington said.

Her parents told her the jewels were moved from the kitchen and placed in the toe of one of Boland’s riding boots “I remember seeing Uncle Harry’s boots in the bottom of the wardrobe but had no idea what they were hiding.”

Her efforts to track down the jewels were futile. “I went to the Russian embassy with my sister and they were very mystified by the whole story,” she said. “They looked at us like we had horns, to be honest.”

She sought the help of the Irish ambassador in Moscow, who encouraged her to keep pursuing the Soviet embassy in Dublin. “If they thought you were somebody who would be likely to visit Moscow and return spreading the gospel about [Mikhail] Gorbachev’s policies, you would get great attention,” the diplomat wrote.

Mrs Barrington also asked the Department of Foreign Affairs to make an official representation to the USSR government on the family’s behalf.

In response to a recent query from The Irish Times, counsel for the Russian Embassy in Dublin Andrey Nikeryasov said the jewels were now in the State Diamond Fund in the Kremlin. This museum, which is open to the public, is said to have one the world’s most valuable collections of jewels, after the collections of crown jewels in the UK and Iran.

He said the museum moved around exhibits from time to time so he could not say if they were on display, or in storage.

The State Diamond Fund did not respond to queries.

Mrs Barrington said the information had come a bit late for her. “I’m 90 now so I’m not likely to go trotting off to the Kremlin at this stage in my life but maybe someone in the family will be interested. I would love to see a picture of them,” she said.

“My mother said they were pretty ordinary-looking, for jewels.”