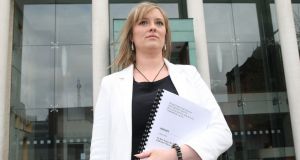 Máiría Cahill, who was raped as a teenager by a senior IRA figure, has called for the immediate removal of former Guardian editor Alan Rusbridger from the Commission on the Future of Media, set up by the Irish Government.

It follows his first public comments on media columnist Roy Greenslade’s failure to disclose his support for the IRA.

The Guardian apologised last week to Ms Cahill over an article written in 2014 by Mr Greenslade about her case. Mr Greenslade recently revealed he was a long-time supporter of the IRA’s campaign of violence.

Writing in the Guardian yesterday, Mr Rusbridger criticised Mr Greenslade for being “hypocritical” in that 2014 column for the newspaper where he questioned the non-disclosure of Ms Cahill’s own political affiliations in the course of a BBC Spotlight documentary about her rape and the subsequent cover-up by Republicans.

Mr Rusbridger wrote: “Had Greenslade been open to me about it in 2014, I would have been able to come to a different judgment about it overall. So I am sincerely sorry to Máiría Cahill, both for the article and for the upset it must have caused her.”

However, Ms Cahill said on Sunday night Mr Rusbridger’s comment piece framed Mr Greenslade’s opinion piece against the Guardian’s overall support for the peace process, which she said was a disgrace.

In a post on Twitter, Ms Cahill said: “The Government should just remove Alan Rusbridger and put an end to this nonsense. He clearly cannot see the extent of what he has done wrong.”

Until this weekend she said it was a matter for Mr Rusbridger’s own conscience. She also pointed out he must have known for at least a decade, as most other journalists did, about Mr Greenslade’s support for Sinn Féin and republicanism.

Setting out her objection to his opinion piece, she tweeted: “The Guardian are still weighing my child abuse against the peace process. The IRA investigation into my abuse took place in 1999-2000 in ‘peace time’.

“Why did he not just write about Roy and his Sinn Féin motive?”

Mr Greenslade has also admitted he worked for Sinn Féin’s An Phoblacht newspaper under the pseudonym George King for decades while a Fleet Street journalist and editor.

Mr Rusbridger has already faced calls to resign from the commission from Labour leader Alan Kelly and from Fine Gael Senator Regina Doherty.

Both Taoiseach Micheál Martin, who has been a strong supporter of Ms Cahill, and Minister for Media Catherine Martin have said they are taking the development seriously.

In a statement issued over the weekend, Ms Martin said: “I have conveyed to Ms Cahill my abhorrence at the abuse she suffered and the subsequent horrendous ordeal that she had to endure.

“I have always admired her tenacity and courage in speaking up, not just for herself, but as a means of supporting other abuse victims. Like many abuse victims, her suffering was amplified by criticism and judgment by others.

“In the circumstances, I am treating her correspondence with the utmost seriousness.”

Sinn Féin leader Mary Lou McDonald said the decision on Mr Rusbridger’s future on the commission was one for the Taoiseach.

She criticised Tánaiste Leo Varadkar for claiming republicans had “agents” within the media, saying the comments were most unwelcome and suggested a witch-hunt.

“I am not surprised by [Mr Greenslade’s] politics at all. Anybody who has read his journalism over the years will know where he stands,” she said.