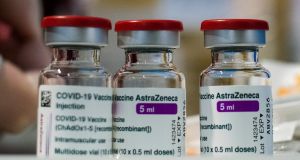 Ireland may ask other European countries to share stockpiled Covid-19 vaccines amid concern about the reliability of delivery commitments from manufacturer AstraZeneca in the coming months.

Minister for Health Stephen Donnelly has asked the vaccine taskforce to examine what “legitimate avenues” may be used to increase the Government’s options following reports of large numbers of AstraZeneca vaccines going unused in Germany, Italy and France.

Mr Donnelly yesterday expressed serious concern about the reliability of AstraZeneca’s deliveries, saying its forecast for deliveries had changed three times in a week.

In the first use of the European Union’s controls on the export of vaccines made in the bloc, Italy yesterday blocked a shipment of 250,000 doses of AstraZeneca’s vaccine destined for Australia. The Rome government refused an export permit and notified the European Commission, which did not object, officials said.

Mr Donnelly came under pressure in the Dáil to mandate the taskforce to unilaterally secure supplies amid growing concern from TDs and GPs about the pace of the rollout.

Fine Gael TD Eoghan Murphy said the commission had said countries are free to make their own deals rather than awaiting deliveries through the EU system. Mr Donnelly said “certainly if there are EU countries that do not want to use all of their AstraZeneca doses we will most certainly take them”.

There had been concern about a lack of data about the use of the AstraZeneca jab among older people but Mr Donnelly said “the emerging and ongoing evidence on AstraZeneca in the field is very positive”.

“If there are other supplies we can access certainly the taskforce will look to see what they may be.”

The National Immunisation Advisory Committee is currently examining evidence from UK studies which appear to show that the AstraZeneca jab is effective in older people.

Asked whether the committee was considering recommending the use of this vaccine in over-70s, chairwoman Prof Karina Butler said it was “keeping everything under review as [it] wishes for [the] most efficient, effective and safe rollout of vaccines given their tremendous potential impact”.

Pharmacists have asked the Government to ensure their staff, and not just pharmacists, are inoculated before mass vaccination begins from their outlets next month. The Irish Pharmacy Union said talks were ongoing with the HSE and the Pharmaceutical Society of Ireland on the involvement of pharmacists in the programme, with the Government hoping that up to 250,000 doses a week can be administered in the second quarter if supplies are available.

A spokeswoman for the HSE said it was “working closely” with pharmacists to put in place a model and that talks were at “an advanced stage”.

The HSE yesterday defended the vaccine rollout, which it said was “only limited by supply”. It said the shortfall in AstraZeneca deliveries would mean 25,000 fewer people than planned would receive jabs between last week and this week.

People who have conditions that put them at risk of severe Covid-19 disease and who are aged 16-69 will begin to receive their vaccines from next week.

The State’s medicines regulator yesterday said it had received 17 reports of elderly patients dying after receiving the vaccine to date, but that all the deceased had underlying conditions or concurrent illnesses with a small number having tested positive for the disease.

The Health Products Regulatory Authority said that fatalities due to underlying disease or natural causes will continue to occur, including after vaccination.

Nphet member Prof Philip Nolan said the number of cases was falling by 2 to 4 per cent a day and halving every 18 to 36 days.

Covid-19: Major change to vaccine rollout planned amid expectations AstraZeneca will be limited to over 60s 15:15
Covid-19: No deaths in North but 97 more infections 15:02
Sinn Féin’s O’Neill praises reconciliation efforts by royal family 14:50
Valuable dog stolen after owner threatened by armed thief 13:05
More rules could be relaxed in North as Covid-19 data improves 12:30