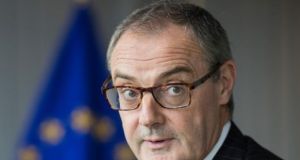 People in the Republic talking up a united Ireland as inevitable due to Brexit are provoking the unionist backlash over the Northern Ireland protocol, a former European Union ambassador to the United States has claimed.

It is also “deeply unhelpful” during tensions caused by the de facto trade border on the Irish Sea as a result of the UK’s decision to pull out of the EU, he warned.

“There is a huge responsibility also on the South not to overtalk...about Border polls and reunification,” he said.

“This is what is deeply destabilising to the unionist community. Because they do see Northern Ireland having somehow a semi-detached status now which is the sort of ante-room to reunification, which is what some people are talking it up as.”

Mr O’Sullivan also served as secretary general of the European Commission. Speaking at an online discussion on the post-Brexit trade deal hosted by NUI Galway, Mr O’Sullivan said a united Ireland “may happen, it may not happen” but “we have a long way to go”.

The Government’s Shared Island initiative to build consensus among all traditions and communities is the “right approach”, he said. “Talking as though a united Ireland is now sort of inexorable, inevitable . . . is deeply unhelpful in this situation,” he added.

“We should all learn to live with what we have . . . but leave it until later years for the decisions that may present themselves in the future.”

The Democratic Unionist Party were opposed to former British prime minister Theresa May’s negotiated “backstop” arrangement which would have avoided the current impasse, he also said.

Mr O’Sullivan suggested prime minister Boris Johnson signed up to the alternative arrangement – the Northern Ireland Protocol – with no intention of adhering to it.

“Frankly, I never understood how he could sign such a thing . . . especially since he had always taken a view it was inconceivable. Of course we are now left with the suspicion that he may have signed it with the intention of not actually respecting it, which is kind of what is happening at the moment,” said Mr O’Sullivan.

The UK government’s contentious decision on Wednesday to unilaterally extend a grace period under the protocol for checks on some goods coming into the North from Britain is “going to complicate issues rather than improve them”, he cautioned.

On Anglo-Irish relations, Brexit has been “hugely damaging” and “has basically undone” all of the advances of recent years which culminated in Queen Elizabeth’s visit to Ireland in 2011, he said. Mr O’Sullivan also accused the British government of having “consciously decided to maintain an approach of confrontation” with the EU.

“My deep suspicion is they are doing this because they think it serves their domestic agenda, it plays into some of the highly Europhobic tabloid press, it plays to their base . . . and it is a useful bogey man that every time there is a problem you just blame Brussels.”

Mr O’Sullivan predicted a bumpy period ahead in UK-EU relations and that Ireland, North and South, is “going to be the meat in that sandwich and will feel some of the worst difficulties”.

The former EU ambassador to the US said the White House would not want to get in the middle of the “squabble”. But it could intervene as a “calming voice” should there be any risks to the peace process as a result of Brexit.

“There is no doubt about it..President Biden deeply feels his Irish connections,” he added.

Mr O’Sullivan emphasised the Irish lobby influence, its support for the Belfast Agreement and that the Americans consider themselves co-guarantors of this arrangement. He said there would be considerable concern at anything that appeared to jeopardise the peace process and reconciliation.

Also speaking at the discussion, former European Commission secretary general and ex-EU ambassador to the World Trade Organisation Carlo Trojan suggested a solution to the dispute over the Irish Sea border.

The key issue is border checks on food of animal and plant origin, live animals and plants – also known as sanitary and phytosanitary (SPS) checks.

Mr Trojan said there is “no immediate need for the UK to change their rules, which are at the moment identical to the EU rules” on SPS standards and if London agreed to keep the status quo for several years it “would solve the whole problem immediately”.

Katy Hayward, professor of political sociology at Queen’s University Belfast, said she had heard unionists and loyalists talking about an SPS or Swiss-style solution. But it would come down to how much the UK government might be prepared to move towards it.

“I don’t see the UK being able to follow those rules for any longer than it needs to do so, and not for Northern Ireland,” she added.