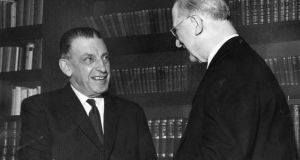 His sister was minding one-year-old Herbert in the family sitting room at number 2 Capel Street one day in late January 1916. He was standing in front of her, she would testify, when a shot rang out from the revolver that another brother, 16-year-old John, was fiddling with. Herbert fell down dead, a bullet through his head.

John Lemass, later known to the world outside the family as “Seán”, would become a leader of anti-Treaty forces, a TD and then taoiseach, and his tragic loss that day, until now only known to close family, would be compounded seven years later by the violent death of another brother, Noel, at the end of the Civil War. Both deaths seem to have marked him profoundly.

Herbert’s death was ruled accidental by an inquest on January 29th, 1916, and The Irish Times would record that “The jury expressed the opinion that something should be done to prevent boys getting possession of firearms.”

At the time Seán and Noel were members of the Irish Volunteers, from which, presumably, the gun emanated. Both would be interred in Glasnevin Cemetery, along with a third brother, Patrick, who died in 1926 of natural causes.

The death has come to light in research by TCD historian, Eunan O’Halpin, in his work on a book on the dead of the decade 1913-23.

In an article in today’s Irish Times Weekend supplement Prof O’Halpin speculates on the effect of the tragedy on Lemass’s sympathetic attitude to fellow veterans of both sides, and argues that the story will give historians a deeper insight into his pragmatism and unwillingness to engage in Civil War recriminations.

“One distinctive aspect of Lemass’s political persona,” O’Halpin writes, “ was his disinclination to hark on about the past . . . Lemass was notable for his refusal to attack opponents in terms of their ‘national records’ or alleged Civil War misdeeds.”