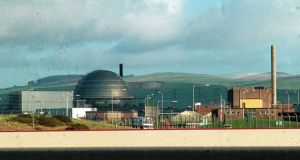 in Belfast confirm the secret dumping of radioactive waste in Belfast and Derry in the early 1980s.

They also show the issue of radioactive discharges from the Windscale nuclear plant in Cumbria generated concern among Northern Ireland Office officials 30 years ago.

The issue first surfaced in a briefing note for a visit by a NIO minister to Down District Council in November 1983. In a note to officials , Miss A E V Kingsmill of the NIO warned “the question of radioactive pollution from Windscale and the associated cancer scare has raised a great deal of concern in certain coastal areas of the district, for example at Kilclief [Co Down]”. At the same time the Northern Ireland Assembly, set up by Jim Prior to advance devolution, had discussed nuclear waste being dumped into the Irish Sea from Windscale and had called on the British government to carry out an urgent survey into the levels of radioactivity on the coasts of Northern Ireland.

In response, officials prepared a briefing note for NIO minister Adam Butler that sought to reassure the public. Dated December 6th, 1983, it emphasised that regular monitoring of the coastline as well as of seaweed and fish had been carried out since 1977 following the Windscale inquiry of that year.

Seaweed samples
These surveys showed that the radioactivity of the seaweed samples generally fell within a typical west European background level. It went on: “The fish samples are taken from catches landed at Ardglass and Portavogie. The activity of the samples can be above normal background levels depending on the season and the area of the catch.”

However, even these enhanced levels were well within the limits recommended by the International Commission on Radiological Protection.

The files show that in the Republic, samples of seaweed were collected at Carlingford, Skerries, Dunmore and Rosslare and sent to the UK Fisheries Research Laboratory for analysis. It said: “The concentrations reported to date are considered to be of no radiological significance.”

Disposal sites
A memo in the file revealed that solid radioactive waste had been buried at two local authority disposal sites during the period 1977-82. These were at Duncrue Street in north Belfast and at Culmore Point outside Derry. At Duncrue Street, the memo noted, “a number of controlled burials of hospital/university waste of short half-life together with small amounts of industrial waste were arranged”.

The total activity disposed of was approximately 180 millicuries, of which the bulk comprised radioactive iodine with a half-life of less than two months. At Culmore Point, two consignments of hospital waste had been disposed of by controlled burial.