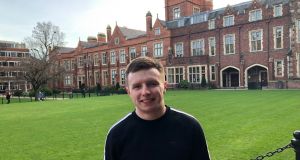 Moving to Belfast was “a bit of a culture shock” for Jude Perry from Ballymote, Co Sligo.

But this week the 20-year-old son of former minister of state John Perry set up a Young Fine Gael branch at Queen’s University, where he is in his second year studying history and politics.

“I think people in the South don’t really understand Northern Ireland; they would do well to come up and pay a visit. I think there is a real hunger in Northern Ireland for a party that provides people with a sort of middle ground to debate issues, and is not extremely on one side of an argument. I think Fine Gael could offer that,” he said.

He insisted there was steady interest in the new Queen’s branch from students, and from some people outside the university, who “admired the way the Government was acting in light of Brexit”. They also liked how Taoiseach Leo Varadkar and Tánaiste Simon Coveney “had really stood up for the people of the North in ensuring there would be no hard border on the island of Ireland”, he said.

His ambition is to see Fine Gael run candidates in the North within a decade, and he expects to see a united Ireland within his lifetime.

“I definitely think we could see us running candidates in the next 10 years. It would be good for us to get a foothold in Northern Ireland. When [then party leader] Garret FitzGerald founded Young Fine Gael in 1977 he envisaged an all-Ireland organisation.”

Mr Perry said he looked forward to “engaging with parties across both nationalist and unionist communities and try to provide a platform for young people.”

Young Fine Gael has yet to form any specific policies for the North, Mr Perry said, but he expected the branch would be campaigning “on issues such as marriage equality and other social issues that affect young people in Northern Ireland, like abortion services”.

Last week Mr Perry travelled home to Sligo to nominate his father at a selection convention for local council elections. Mr Perry senior lost his Dáil seat in the 2016 General Election. He was not selected at the recent convention.