Q&A: Why did Tánaiste Leo Varadkar face a vote of confidence in the Dáil?

Covid restrictions meant Dáil proceedings transferred to the National Convention Centre at a cost of €25,000

Tánaiste Leo Varadkar says "many" claims made against him "were trumped up, or simply made up" as he survived a vote of confidence in the Dáil by 92 votes to 65. Video: Oireachtas TV 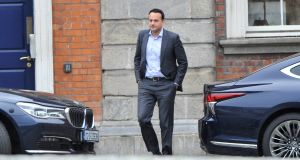 Why was there a vote of confidence in the Dáil?

When individual Ministers face sustained criticism over performance, or controversial actions, or over their propriety – personal or political – it is not unusual that the Opposition will table a motion of no confidence.

In this instance, Sinn Féin tabled a motion on Tánaiste Leo Varadkar, over his actions in passing a confidential document on the new GP contract agreed with the Irish Medical Organisation to the head of a rival organisation, the National Association of General Practitioners. The person was Dr Maitiú Ó Tuathail, who was also a friend of Varadkar’s.

But was that not all played out last week?

Yes it was. Many on the Government side and some Opposition TDs believe the matter was brought to resolution after the question and answer session in the Dáil last week. Varadkar admitted it was inappropriate, apologised and said it would not happen again. However, he claimed his motive was to publicise what he thought was a good deal to as many GPs as possible. He also played down the friendship with Ó Tuathail, saying it was not as close as was being portrayed.

However, Sinn Féin countered his explanation was not credible and also said his friendship with Ó Tuathail pointed to a golden circle of insiders.

The party announced on Friday it would table the motion during private members’ time. At the Cabinet meeting on Tuesday morning the Government proposed a counter-motion expressing confidence in the Tánaiste.

Why did it take place in the National Convention Centre?

Under Dáil standing orders, motions relating to confidence must be voted on by all 160 TDs and must take place immediately after the debate. Because of the Covid restrictions it has meant that today’s Dáil proceedings transferred to the National Convention Centre at a cost of €25,000.

Was there ever any doubt of the outcome?

No, not really. Village Magazine promised to publish new disclosures on Monday but its report on more meetings or encounters with Ó Tuathail, based on the doctor’s WhatsApp messages, did not really make any difference. It did not amount to a “smoking gun”, the Sligo Independent TD Marian Harkin said during the Dáil debate.

The three parties in the Government are disparate in many respects and motions like this can force a number of doubtful TDs over the edge. The Greens have remained solid on this particular issue but there was internal criticism within Fianna Fáil about Micheál Martin’s defence. In the event, the most prominent of those rebels, Fianna Fáil’s Marc MacSharry, indicated he would vote with the Government, citing de Valera’s “empty formula” – in other words the vote was meaningless.

In addition, a significant number of Independent TDs including Harkin, Peter Fitzpatrick, Sean Canney and Michael Lowry indicated they would vote with the Government.

How did it play out?

Sinn Féin again questioned Varadkar’s account, saying it was not credible. Mary Lou McDonald focused her attack on insiders, on “old boys clubs” and on those on the margins who continue to be excluded. Fine Gael responded with Heather Humphreys and Peter Burke leading a direct attack on Sinn Féin and its paramilitary past, and accusing it of “double standards” in relation to the North.

Leo Varadkar spoke last. In his speech he praised Ó Tuathail and said he had been used as a pawn. He directly accused the Village magazine of a “trumped up” report claiming 10 further encounters this week. He said he was out of Dublin for four (in Barcelona and Brussels twice) and Ó Tuathail had never met him and Simon Harris together, or him and Paschal Donohoe.

“We’re not immune from the corrosive forces experienced in other established democracies: fake news conspiracy theories, the far right, far left, unregulated fringe publications, and unverified social media grievances and score-settling in spheres masquerading as journalism,” he told the Dáil.