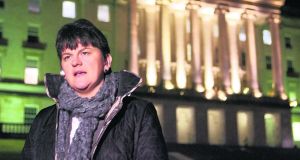 DUP Minister for Enterprise Arlene Foster: said she had approached senior PSNI officers and the Director of Public Prosecutions over Gerry Kelly’s comments

The PSNI is investigating incidents at Sunday’s controversial republican parade in Co Tyrone and may prepare files for the DPP in relation to it.

Unionist parties are pressing for prosecutions, claiming the content of a speech by senior Sinn Féin figure Gerry Kelly in Castlederg and other elements of the republican parade were an illegal glorification of terrorism.

They believe conditions set by the Parades Commission which rules on contentious marches were broken.

During the commemoration, Mr Kelly said: “Let me state this clearly at the start – no unionist MLA, councillor, MP or Minister; no loyalist paramilitary or loyal order spokesperson, no matter how loud they shout, will prevent me or any other republican honouring our comrades who gave their lives in the struggle for Irish freedom and equality.”

He added: “Republicans and nationalists of Castlederg and Aghyaran and of Tyrone remember the oppression of house raids, harassment, internment, collusion, imprisonment and shoot to kill.

“They also remember when the RUC, UDR and British army . . . tried to prevent the dignified burials of our comrades killed in action.”

DUP Minister for Enterprise Arlene Foster said she had approached senior PSNI officers and Director of Public Prosecutions Barra McGrory over these comments and the paramilitary-style parade which preceded the unveiling of the republican memorial.

She also complained of banners bearing Armalites, drums adorned with images of gunmen and the men in paramilitary-style uniform.

“It is vital that not only is evidence presented of all these breaches but that prosecutions are pursued,” Ms Foster added.

“Victims in Castlederg yesterday had further pain and trauma imposed upon them against their will. This parade should have been prevented from taking place, but it having been allowed to proceed there must be action taken against those who have stepped outside the law in this terrorist commemoration.”

DUP MP Jeffrey Donaldson, meanwhile, has rejected calls by the chairman of the Police Federation, the rank and file officers’ union, for a six-month ban on all parades.

He said the proposal, made following Friday’s serious violence in Belfast city centre in which 56 officers were injured, “will not provide a long-term solution and it may not even reduce problems in the short term”.

Animal welfare group raises concern over live exports 22:25
FG and FF back transition payment for those retired before qualifying for State pension 22:06
Two men questioned about attack where man was set on fire 22:01
Drew Harris says Garda have necessary firearms capacity 21:53
Scientist says methane from farming should be treated differently to CO2 21:42
SUBSCRIBER ONLY