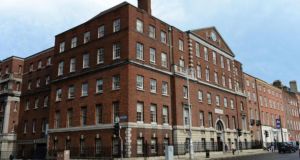 A medical ethics expert has told the Oireachtas health committee hearings on abortion legislation that legislators should “at the very least” consider reducing the maximum penalty of 14 years in prison for women who have illegal terminations.

A series of experts have been giving evidence to the committee and taking questions on the Government’s draft abortion legislation from TDs and Senators.

Dr Ruth Fletcher, senior lecturer in law and director of the centre for law, ethics and society at Keele University, said the criminalisation of women’s decisions to end their pregnancies was a “disproportionate and unfair” response to the constitutional direction to vindicate the life of the unborn as far as practicable.

Dr Fletcher said it would be harmful to adopt the proposed new maximum penalty of 14 years and legislators should at the very least consider reducing that term.

She said the proposed legislation did not do enough to meet the ethical obligation to value women’s lives, and referred to the “troubling mistrust” of women with suicidal ideation.

“Woman are conscious, sentient beings with moral viewpoints with responsibilities to others, when foetuses are not quite that. They are the bearers of biological life and they will be future persons., but this is not the same kind of life as that of a breathing, feeling, thinking woman.”

Sunniva McDonagh SC said she wanted to make some “constructive criticisms” in relation to the Protection of Life During Pregnancy Bill 2013. She said the planned new law could result in what she described as “forum shopping” by the patient or doctors involved.

Ms McDonagh noted that the draft heads of the Bill stated that psychiatrists “should” examine the patient, while the woman’s general practitioner “shall” be consulted. “In law a mere exhortation is not mandatory or enforceable,” she said.

She said the Bill had been left open to the suggestion that psychiatrists were being involved for some non-medical purpose. “A further consequence of not requiring an examination of the patient is to increase the likelihood of forum shopping by the patient or indeed the doctors involved.”

Ms McDonagh said that for the first time the termination of pregnancy was being considered as the actual treatment for suicidal ideation. “There is no comfort in the Bill that this does not extend right up to birth,” she said.

It was hard to see why an unborn child should have less protection in a case of risk of self-destruction than in a physical case, she said.