Private car clampers to be regulated for first time 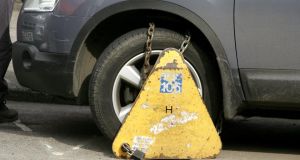 Caps on clamp-release fees to be introduced to protect motorists


Car clampers operating on private property are to be regulated and licensed for the first time under new Department of Transport legislation.

A clamping regulator is to be established, and caps on clamp-release fees are to be set as part of the Regulation of Vehicle Immobilisation Bill 2013.

The legislation is designed to protect motorists from “ bad behaviour by disreputable operators”, Minister for Transport Leo Varadkar said, and to create an appeals and redress system for motorists who feel they have been unjustly clamped.

“The public is well aware of cases where private clampers have behaved in a manner which gives rise to serious concerns. I do not favour an outright ban on clamping on private property, as landowners need to be able to deal with nuisance parking. However, the practice must be regulated,” Mr Varadkar said.


Local authorities
On-street clamping is currently regulated by local authorities which either operate the service directly or by contract to a private company. But any property owner can engage a firm to clamp vehicles parked on their lands without permission and there are no legal restrictions on what a motorist can be charged to have their vehicle released.

The Bill’s main provisions, which will be published today, would see a new licensing system introduced for clamping companies. All clamping staff and their vehicles will have to be clearly identifiable and will have to abide by a code of practice which will be drawn up by the regulator.

The National Transport Authority has been designated as the regulator and will have the power to govern both public and private clamping. The maximum fees will be set by the regulator, but it is likely that they will be set close to the €80 levied by Dublin City Council’s clampers Dublin Street Parking Services.


Recommendations
The legislation is being drafted following consultation with the Joint Oireachtas Transport Committee, which in March 2012 published a report with 38 recommendations on the regulation of the industry. Many of their recommendations are expected to make it into the final Bill which the Minister hopes to introduce in the Oireachtas later in the year.

The committee recommended standardisation of penalties, signage, training and appeal processes. Minimum and maximum charges should be determined nationally and clampers in any area would all have to impose the same charge regardless of whether they were servicing public or private property.

The committee also recommended that clamping be prohibited in hospital car parks so that people who have had to abandon cars in emergency situations are not penalised. However, it is understood that the legislation will not incorporate this provision and it will be left to the discretion of individual hospitals whether they use clamping.