This should be the last presidential election that excludes emigrants

Opinion: President represents ‘all people of Ireland’, but citizens abroad have no say 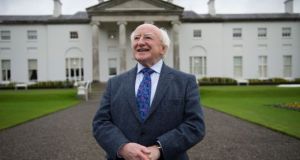 The Irish president is endowed with relatively few powers, but from the presidency of Mary Robinson onwards, the role has acquired tremendous symbolic power. As a result, the public perception of the Irish president has changed, both in Ireland and internationally, and the role has come to more strongly embody the nation and its diaspora as a result.

Lighting a candle in the window of Áras an Uachtaráin for “our exiles and our emigrants”, Robinson urged Ireland to cherish its diaspora. By arguing for the idea of a fifth province of Ireland, “a place within us, that place that is open to the other, that swinging door which allows us to venture out and others to venture in”, she detached Irish identity from residency in Ireland, and acknowledged the strong identifications and links with Ireland that both emigrants and those of Irish descent feel so strongly.

This level of recognition of the Irish diaspora by the Irish president, after decades of being ignored except as sources of tourist dollars or the occasional reference to remittances, ensured that Robinson’s visits to the Irish abroad were triumphant processions.

In the past 21 years, her successors Mary McAleese and Michael D Higgins have reinforced the power of the presidency for Ireland in their own ways, and have assiduously addressed, visited and strengthened bonds between Ireland and its diaspora.

Mary McAleese spotlighted the rich diversity of what she referred to as “the global Irish family”. Importantly, she said that Ireland needed to comprehend the subtleties and complexities of the Irish diaspora.

Michael D Higgins, both before and after assuming the role of president, argued that its diaspora is one of Ireland’s strengths. He emphasises the central part emigration has played in Irish history and experience, and the need to intensify connections with contemporary emigrants and the descendants of earlier generations of emigrants.

Within the diaspora, the response to these overtures has been overwhelmingly positive. Older migrants, long ignored unless viewed as a source of monetary support, for whom return to Ireland was not a realistic possibility, have felt included in a way their citizenship always warranted.

Younger emigrants found they could be proud of a country that, in electing this impressive series of presidents often envied by others, heralded the momentous social changes that have occurred in Ireland in the past 20 years.

Descendants of previous Irish emigrants found that their allegiances to Ireland could be expressed in ways that have a progressive resonance, as well as, if they wished, utilising traditional images and emblems.

This coming Friday, Irish citizens living in the Republic of Ireland will go to the polls to choose their president for the next seven years. In the next presidential election, possibly in 2025, we hope Irish citizens abroad will also be able to participate in choosing the president.

This will come about if the referendum to give Irish citizens living abroad the right to vote in presidential elections, scheduled for May 24th, 2019 is successful.

The international campaign for votes for Irish citizens abroad places the highest priority on winning this referendum next May. The Irish diaspora feel that the Irish president is our president too, and have been tweeting to express this in recent days using the hashtag #OurPresident2.

In the current presidential campaign, all candidates have included a mention of the Irish diaspora in their manifestos. They stress their suitability for representing Ireland abroad, which inevitably as president, would involve much contact with the diaspora.

Only the Sinn Féin candidate Liadh Ní Riada makes the issue of voting rights for Irish citizens in Northern Ireland and for those living abroad a prominent issue, although it is known that Michael D Higgins supports voting rights in presidential elections for all citizens, confirmed in a public meeting in Hammersmith shortly before his 2011 campaign for the presidency.

So the candidates speak broadly as if they will represent all the people of Ireland, but citizens abroad have absolutely no say in electing who represents them.

Ireland is often criticised (within the EU, by the UN) for restricting the rights of its citizens abroad, for being out of line with 130 countries worldwide by having no system to allow them to vote, but perhaps the reasons to extending the franchise to citizens abroad are more positive.

The Irish State is rightly proud of its Global Irish Policy, and how it looks after its diaspora, and nothing would signify its deep roots in Ireland more than a Yes vote to give Irish citizens abroad the right to vote for the Irish president. This would enhance perceptions of Ireland internationally and bind the diaspora ever closer.

This should be the last presidential election in which citizens abroad are unable to participate.

Mary J Hickman is professor emeritus of Irish Studies at London Metropolitan University, and chair of the Votes for Irish Citizens Abroad campaign (vica.ie) in London. She is also on the advisory committee of VotingRights.ie, a global coalition of campaigns in favour of voting rights for Irish citizens overseas.

Irish Times Abroad is running a “virtual vote” for emigrants ahead of the presidential election and blasphemy referendum this week. To take part, you must be a registered member of the Irish Times Abroad Network, and opted in to participate in polls. To join the free Network, click here.