Post-Brexit trade checks must not be on Border - EPP chief 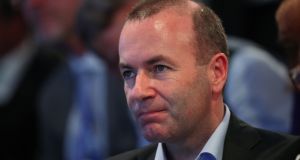 Manfred Weber, leader of the European People’s Party in the European Parliament: “In the next weeks, there are tough decisions to make,” Mr Weber said ahead of his meeting with British prime minister Theresa May on Tuesday. Photograph: Sean Gallup/Getty Images

Any new technical or electronic checks on trade after Brexit must be at ports and airports and not on the Border, the leader of the European People’s Party (EPP) Manfred Weber has said.

Mr Weber was speaking to The Irish Times ahead of his meeting with British prime minister Theresa May on Tuesday.

Without a solution to the Border there will be no support from the EPP family . . .

“In the next weeks, there are tough decisions to make,” Mr Weber said. “On a technical level, a lot of things have been agreed. Now is the time for political decisions.

“Chequers was a good step, but it is not the final position,” he said. The UK government’s Chequers plan lays out its future relationship with the EU.

He stressed that the approval of the European Parliament – and therefore of the EPP group that he leads – will be needed for the withdrawal treaty that EU and UK negotiators hope to agree over the coming weeks.

“Without a solution to the Border there will be no support from the EPP family . . . We cannot accept a solution where we have strict border controls.”

He said that there was “already sometimes checks” on agricultural goods moving from the North to Britain. Asked if those checks could be expanded, he replied, “Exactly”.

Mr Weber insisted the EU must “fully respect” the decision of the UK to leave. “But it must be clear that a country leaving is losing advantages . . . For us, it must be clear – it makes a difference when someone is leaving.”

I hear it can be uncertain or unclear . . . I don’t like this. People must know what Brexit is

He said that far from leading to the further fracturing of the EU, Brexit had instead strengthened the European Union. The “pre-condition” for this was that the 27 remaining countries were united, he said, to face the challenges from “external powers who want to see a weak Europe”.

Mr Weber called for clarity in the political declaration on the future relationship that is intended to accompany the withdrawal agreement.

“I hear it can be uncertain or unclear . . . I don’t like this. People must know what Brexit is,” he said.

Mr Weber is seeking to be the EPP’s nominee in the “Spitzenkandidaten” process, where the major parties in the European Parliament elections put forward lead candidates to head the European Commission after next year’s European elections.

As a German Christian Democrat MEP, he is in a strong position to secure the nomination, though Brussels gossip suggests that Brexit negotiator Michel Barnier could also be a contender for the commission job.

He says Europe must address the questions of identity , adding: “Where is the end of the enlargement process?”

For him, the line is clear: the Balkan states can eventually join, if they satisfy EU norms, but Turkey cannot. “Ninety-nine per cent of people tell me that Turkey is not Europe,” he says.