Polish candidates reach out to wider community in grassroots campaigns 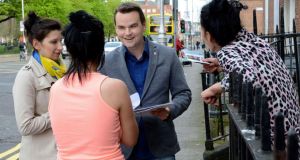 Rafal Kornatka, who is standing as an independent candidate in the local election in Dublin north inner city, canvassing in Gardiner Place. Photograph: Dave Meehan

Rafal Kornatka may be new to Irish politics, but he’s learning the campaign ropes fast. The sales representative from Poland is seeking election in Dublin’s north inner city. He doesn’t have gaudy election posters because they just seem to generate negative feedback. He avoids dumping campaign literature in people’s letter boxes, unless he can speak to them first. He has what he hopes will be his big vote-winner: a three-point plan on how to improve the electoral area.

“I could have lots of more points, but I don’t want to break any promises.” Well, there’s a first from a politician. This is first election campaign for Kornatka (33).He is also hoping for another first: to represent what is now Ireland’s biggest minority group. Latest figures show there are at least 120,000 Polish nationals living in Ireland who are eligible to vote.

Many are well educated – about 40 per cent have third-level qualifications – and many are putting down roots, buying home and raising families. Yet they have no elected presence on Irish councils.

In all, 11 Polish candidates are seeking to change that by contesting local election seats across the country. Most are running in Dublin as Independent candidates and have set up grassroots campaigns aimed at improving communities and developing better facilities for children. There are also Polish hopefuls seeking election in areas including Cork, Kilkenny, Limerick and Monaghan.

Despite their sizeable numbers, they performed dismally in the last election. Some research suggests that less than 1 per cent of EU migrants voted in 2009, even though all residents are eligible to do so. Kornatka puts the poor showing down mainly to ignorance among migrants over voting rights and very low levels of voter registration. “People are interested in taking part in the election process,”he says, “ but in most cases they aren’t aware they can vote. They think they need citizenship, which isn’t the case.”

A former economics graduate and trade union representative, Kornatka spends much of his spare time volunteering with the scouts and on community forums. If he is to have any chance of being elected, the north inner city is as good a place as any to start. There are pockets of the constituency where more than half the population are foreign nationals, so he is been out with his clipboard since last year running a voter-registration drive.

He remains hopeful. The migrant community has changed in the past four years, he says, while Irish voters tell him they would be happy to support a new voice. “I think the communities are more inclusive and integrated now. The Polish community, for example; many are buying houses and having families. Maybe this year will be our year? People asked me if I’m just representing migrants or the wider community. My answer is that I am a citizen of Dublin who wants to do something for the whole community, not just migrants.”

Further north in Ballymun, Agnieszka Wieczorkowska (32), a mother of one, is also standing as an Independent. Her campaign is aimed at harnessing migrants and non-migrants alike. “I want to bring the perspective of a woman, mother and migrant to Dublin City Council, ” says Wieczorkowska, who moved here from Poland just four years ago.

A clinical psychologist, she spends much of her time volunteering with community groups and sees better facilities for children and people with disabilities as a pressing need.

Poles, of course, are only part of the picture.

Nadine Meisonnave (28) from Estonia is running for Fine Gael in Pembroke-South Docks in the capital. As a mother and businesswoman – she founded the Maison Neuve estate agency – she chose the party because it aligned closely with her own values.

She sees no reason why migrants and Irish nationals should be regarded any differently by voters. “We are all affected by the same issues,” she says. “Around my constituency, things like flooding, the lack of playgrounds and the need for new schools affect everyone . . .

“I don’t feel like an outsider at all, but maybe it’s time for an outside perspective on these issues.”