State spent €26m on storing files in the past three years 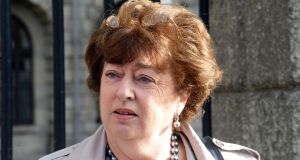 Social Democrats TD Catherine Murphy: “The Department of Public Expenditure and Reform needs to try to get departments to co-operate with each other on storage at a regional level.” Photograph: Cyril Byrne

The Government needs to conduct a review of how it archives and stores departmental files to cut costs, as new figures show the HSE has spent almost €17.5 million in the past three years on storage.

It brings to €26.226 million the overall expenditure in this area in the last three years, an average of €8.74 million annually.

Social Democrats TD Catherine Murphy also called for the State to employ professional archivists, which could in the long term help cut costs.

And she stressed the need for Government departments to co-operate with each other to organise communal storage on a regional basis.

The Kildare North TD received the latest HSE statistics following a series of written parliamentary questions to all Government departments and agencies about the price they paid for storing and archiving files in State-owned and privately-owned rental facilities.

Ms Murphy said “it will cost no matter what happens” because files have to be kept and in suitable facilities to ensure they will not degrade.

Calling for the State to employ professional archivists, she said good archiving before sending files for storage would cut down on the amount spent in retrieving and returning files to storage. Documents likely to be required at a future date would be retained within easy access, while the remainder of a file could be closed and put into “deep storage”.

“If you had departments and various agencies of the State like local government and the HSE, you may well getter a better deal, it will cost less and a tender would be more valuable,” she said.

“Obviously if you need files in Cork you don’t store them in Louth, but the Department of Public Expenditure and Reform needs to try to get departments to co-operate with each other on storage at a regional level.”

She said: “We do things on a ‘silo’ basis,” with no communication on likely areas of co-operation, she said. “Storage is one of those areas that needs to be looked at collectively and if you went about it in a more collaborative way it could cut the expense.”

1 How a ship abandoned by its owner brought deadly cargo to Beirut
2 Well-known figures in Irish domestic soccer arrested over €3m heroin haul
3 Show us the evidence that pubs spread Covid-19, says Government TD
4 Tributes paid as boy (15) who fell from Powerscourt Waterfall named
5 'There is no way I would go' - Irishman in Malta cancels trip home as two weddings put off
Real news has value SUBSCRIBE