‘Lawyers in the Seanad’ holding up judicial appointments reform – Ross

Minister confident Stepaside will reopen on 24 hour basis; says he will run in next general election 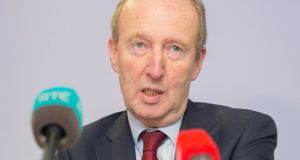 Shane Ross: ‘It got through the Dáil. It will get through the Senate in the early stage in the new session and become law fairly shortly.’ File photograph: Gareth Chaney Collins

Minister for Transport, Tourism and Sport Shane Ross has blamed “lawyers in the Seanad” for holding up the controversial legislation to reform the way judges are appointed.

Mr Ross said he was however “very happy” with the progress of the Judicial Appointments Commission Bill.

“I’d like to see it happen faster but we see the end of the road,” he said

“It got through the Dáil. It will get through the Senate in the early stage in the new session and become law fairly shortly.

“The main hurdle is the Dáil and that has now successfully been done before the summer.”

The Government and Mr Ross had said they hoped the Bill would become law before the summer recess last week but a large number of amendments in the Seanad delayed its progress.

Mr Ross, who was attending the launch of the Government’s new national sports policy in Dublin, rejected suggestions that his Fine Gael colleagues contributed to delays. Many in the party oppose elements of the legislation but Minister for Justice Charlie Flanagan said he was progressing the Bill.

Mr Ross rejected suggestions that there was filibustering by his own Government colleagues.

“It’s the lawyers in the Seanad who are opposing it and taking up an enormous amount of time, but they’re entitled obviously to put down their amendments and they’re very welcome to do so,” he said.

Senator and former attorney general Michael McDowell has expressed his belief that elements of the Bill are unconstitutional and he would ask President Michael D Higgins to use his powers to refer it to the Supreme Court should it pass.

Mr Ross also expressed confidence that Stepaside Garda station in his constituency would re-open on a 24-hour basis.

The Office of Public Works (OPW) is understood to have advised that rebuilding Stepaside, which was closed in 2013, might cost €2 million and is understood to favour a new modular station, built in sections and transported to the site.

When it was put to him that the station, the re-opening of which he insisted be part of the Programme for Government, would be there in some format but not as he envisioned, he said:

“I am very happy that we’re going to have the modern 24-hour, 24/7 Garda station in Stepaside. That will be what we sought.”

Mr Ross also confirmed he would be running again in the general election in Dublin Rathdown.

Asked about reports that constituency colleague and Fine Gael Minister for Arts Josepha Madigan was now the “star of the constituency” in poll ratings, he said he had no idea of the “pecking order” in Dublin Rathdown.