Observations about Mary Robinson and Charles Haughey among documents 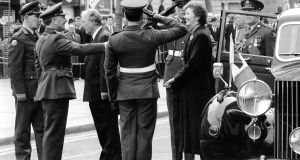 The release of British Government files from the UK National Archives in Kew are often as of much interest to Irish historians as they are to British ones.

They particularly illuminate a difficult time in the history of both countries when the Troubles in Northern Ireland were at their height. They also highlight the often puzzling and puzzled attitudes that British politicians exhibited at the time towards their Irish counterparts. Here are five things we learned from the files:

1: British Ambassador to Ireland Nicholas Fenn called Ireland a “male chauvinist country” in relation to Mary Robinson’s presidential bid
The election of Mary Robinson as president of Ireland in 1990 was a seismic event in Irish political life presaging a more tolerant, liberal society than the one that proceeded it.

It was certainly seen as that before it happened by the British ambassador to Ireland Nicholas Fenn.

After her election, Mr Fenn observed President Robinson behaving “for all the world like a queen” at a state reception in Dublin Castle.

This, he said, provoked “begrudging comment to me of a Fianna Fáil TD that he had not expected to see the day when we would export our monarchy to Ireland. The republican taoiseach (Charles J Haughey) stayed by her side all evening. If this was partly to ensure that he heard everything she said, it also enabled him to bask in her reflected glory.”

He also hoped that her election would help “disavow the gut anti-British instincts of her countrymen”.

Mr Haughey’s involvement in the arms trial of 1970 led Mr Haydon to conclude that he would be “no friend of Britain”.

His election had “caused a number of undesirable figures from his past to emerge from the woodwork”, the ambassador observed.

He noted that both Captain James Kelly and Belfast republican John Kelly were in the public gallery when Mr Haughey was presented to the Dáil as taoiseach. Both had been implicated in the arms trial.

“These people obviously think that their hour has come. I hope they are wrong,” Mr Haydon stated.

“In general Haughey’s history and background have shown him to be no friend of Britain. We must remember that he now wants to win the next election and it is this which will govern his action more than anything else. Similarly he is very adept in his handling of public relations: many of his closest advisers are public relations men (shades of Nixon!).”

Mr Haughey’s early comments condemning IRA violence reassured Mr Haydon, but only slightly. He noted that Mr Haughey’s emphasis on the unification of Ireland will be seen in unionist circles as “counterproductive”.

“If he continues in this vein, we are in for a rough ride,” Mr Haydon opined.

He also observed that business people might welcome his elevation to the highest office, but others would be “uneasy at his somewhat unsavoury reputation for money-making”.

3: Former British prime minister John Major was not too fond of Jacob Rees-Mogg’s father
The British Prime Minister Theresa May might be tempted to conclude that her troubles with the arch-Brexiteer MP Jacob Rees-Mogg is history repeating itself.

Her Tory predecessor John Major had similar troubles over the future of Europe. He famously described those who tried to undermine him on the issue of Europe as “bastards”.

One of the “bastards” was William Rees Mogg, the father of Jacob, who had previously been the editor of The Times and in 1993 was a crossbench member of the House of Lords.

He had taken a judicial review of the then-Conservative government’s ratification of the Maastricht Treaty.

His judicial review failed. Major was privately delighted though he was warned not to make public his satisfaction as this might “provoke the Rees-Mogg brigade into a further Quixotic action”.

In response to that, Major wrote to his private secretary: “Good. A full gloat is merited.”

Official state papers reveal that Thatcher did not have quite the inexhaustive reserves of energy she claimed to have.

Thatcher would often doze off in the back of her official car, an armour-plated Daimler, giving rise to security concerns.

In September 1987, her bodyguard Bob Kingston in No 10 wrote to her private office: “I am concerned that, when the PM dozes in the official car, the design of the headrests is such that, far from supporting her head and neck, they cause her head to drop forward.

“This is in itself hazardous, but when the car is braked or turned, or there is some other disturbance, she lifts her head very quickly, and this I am sure will one day cause at least minor injury.

“I told the PM of my concern at Chequers last weekend. She agreed to the matter of a better design of headrest being pursued.”

5: Denis Thatcher worked quietly behind the scenes for his wife Margaret
Denis Thatcher rarely said anything about his wife in public. He famously opined that it is “better to keep your mouth shut and be thought a fool than open it and remove all doubt”.

He preferred to work quietly behind the scenes on behalf of his wife who he regarded as “one of the greatest women the world has ever known”.

He kept a mental note of all those who had supported his wife and also those who he had perceived to have insulted her.

In 1988 he was presented with an exhaustive list of 229 individuals who might be invited to a reception at Downing Street.

Denis Thatcher graded them by placing ticks beside those he really wanted invited. Those included the entertainer Eric Sykes, who received four ticks, Ronnie Corbett, the songwriter Tim Rice and the golfer Peter Alliss.

Those who incurred his wrath including Paul McCartney, Sir David Attenborough and the newsreader Jan Leeming. Question marks were placed after their names.

The list was eventually wittled down to just 45 names and a number of government ministers.