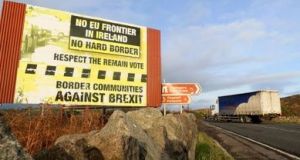 ‘It is safe to assume the Border is already lined with hidden cameras.’

Deal or no deal, we are about to enter a phase of Brexit where technology must be de-ridiculed. The backstop, so unsuccessfully de-dramatised, will otherwise be permanent. In terms of avoiding a hard border, there is no alignment with the EU’s customs union, single market and VAT area that can match the backstop arrangement of keeping Northern Ireland in all three, yet that is the minimum standard being set for the future trading relationship.

Only technology can make it possible to leave the backstop and maintain that standard, short of a Brexit so soft it is politically inconceivable.

The backstop is asymmetric around the UK, with just its customs union extending to Britain. Created to reassure unionists, this adds a number of risks and opportunities for all political players, but everything hinges on an internal UK sea border, where the potential of technology will also be decisive.

If there is a no-deal Brexit, ironically bought about by the backstop, the Republic will have to put up a hard border or accept an internal EU sea border or some combination of both.

Technology will determine the balance of that combination, and how quickly its impact can be mitigated. The less that technology can help at the Border, which is primarily a political problem, the more must be done at the ports, which will become an economic problem.

All of this is very awkward after two years of portraying any interest in technological solutions as the preserve of dreamers, spoofers and idiots.

For around six months after the EU referendum, technology was a topic of serious consideration in the UK and Ireland, until negotiating positions led London to claim it could solve everything and Dublin and Brussels to insist it could solve nothing. These positions then hardened into dogmas that will be painful to abandon.

London’s latest wobble over the backstop demonstrates how excruciating this will be. The so-called Malthouse compromise Westminster voted for last week was simply a rehash of the British government’s original “maximum facilitation” plan for a high-tech border. Prime minister Theresa May’s speech in Belfast this week, reaffirming the need for the backstop, was another admission that plan will not work.

Although the anti-technologists won their case in the court of public opinion, they must reverse it for the withdrawal agreement to work.

The agreement was drafted on the EU side by the European Commission’s deputy chief Brexit negotiator Sabine Weyand. She coined the terms “magical thinking” and “unicorns” to dismiss technological solutions, but has now implied technology can work “in the next few years” because the premise of the backstop as hopefully unnecessary depends on such solutions being developed.

Of course, they still cannot solve everything – but they must be embraced to solve anything.

The first step in finessing the case for technology is to recognise that electronic handling of all paperwork in cross-Border trade is a realistic goal within a concrete, medium-term timescale. It probably cannot be done within the two or three-year transition period. However, it could put a usefully credible time limit on the backstop that would follow.

The EU is rolling out an electronic customs system this year, to be fully implemented by 2025. Guaranteeing the progress of this and similar projects would be ideal backstop exit criteria.

Separating out the issue of paperwork exposes the rest of the technology problem as essentially a matter of surveillance. There must be sufficient monitoring and enforcement of goods traffic at the Border to secure it to international norms. Any infrastructure has been ruled unacceptable by Dublin and Brussels – with London’s eventual concurrence – because it would be a target for violence.

Two questions are now likely to arise: should some level of hardware be tolerated if technology can reduce it to the bare minimum? Even more controversially, should covert equipment be installed on the grounds that nobody can attack it if they cannot find it?

It is safe to assume the Border is already lined with hidden cameras. Automatic number plate recognition is often cited as a basic requirement for an electronic frontier. UK authorities can be coy about this technology and notably have worked out an exemption to revealing its whereabouts under the Data Protection Act.

Many people would object to being secretly observed. This concern is legitimate, but is it a proportionate stance if it stands in the way of a safe, frictionless Border that is being secretly watched regardless?

The most effective use of technology in securing the Border will be in intelligence-led operations against the smugglers who have always exploited it. There is no valid reason for this to be controversial, as London and Dublin should make clear. Sinn Féin signed up to policing and MI5 responsibility for tackling republican gangs in the 2010 Hillsborough Castle agreement.

That agreement is rarely mentioned today, so it is striking that May name-checked it in this week’s Belfast speech.