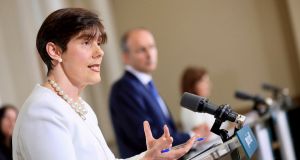 The contents of the Government’s €375 million plan to reopen the State’s 4,000 schools from September was not directly criticised by Opposition parties on Monday who rather focused their concerns on the timing of the plan.

Sinn Féin, Labour and the Social Democrats all criticised the plan as coming very late in the day with each warning that it would make it difficult to ensure a safe return for schools by late August.

Sinn Féin’s education spokesman Donnchadh Ó Laoghaire welcomed the publication of the plan but said its gestation had been masked by “delay and chaos”.

He said getting children back to school safely is what parents, children and teachers want.

Sinn Féin had long been calling for a roadmap to deliver the full and safe return to school, he said, and his party would table a motion in the Dáil on Tuesday laying out such a roadmap, which he claimed would bring much needed clarity to the issue.

“I welcome that the Government has finally released its plan, “ he said. “The delay and the chaos has been inexcusable and we are right up against the wire now.”

He also questioned if there was enough teacher supports for primary schools and criticised the failure to reduce class sizes there.

“We finally have a plan but it’s late in the day and we don’t know if it can be delivered on time. As this is such a crucial issue the Minister for Education [Normal Foley] should take questions in the Dáil on Tuesday about the plan as we can’t wait another three days for detailed answers on issues like how school transport will work in reality,” he said.

While 1,000 teachers were being recruited at post-primary level, only 200 additional teaching posts would be provided at primary level through substitute supply panels, he added.

“Nearly 20 per cent of pupils are in class sizes of 30 or more; and our pupil teacher ratio of 1:25 is totally out of step with the EU average of 1:20. This is the definition of a missed opportunity to reduce class sizes,” he said.

His counterpart in the Social Democrats, Gary Gannon, expressed concern there might not be enough substitute post-primary school teachers available in the event of a second wave of Covid-19.

“While there are positive elements in the plan, I fear that the lateness of the decision will mean that schools will be in a race against the clock to put all the necessary measures in place before students can safely return to school,” he said.

“Our schools have been closed since March and it’s a pity that the Government is only belatedly throwing money at our under-funded primary and post-primary education sector so late in the day.”

For its part, the Government accepted the plan could not guarantee no outbreak or instances of Covid-19 in schools.

Taoiseach Micheál Martin told a press conference following Monday’s Cabinet meeting confirming the plan: “There is no zero risk scenario but we can dramatically reduce the risk.”

However, opposition parties said they agreed with teacher union assessments that the €375 million may not be sufficient and supplementary funding might need to be made available in October.