Old divisions march on in Co Armagh ahead of Tweflth

Sectarianism? ‘It sounds like a dirty word, as if a finger is being pointed at you’ 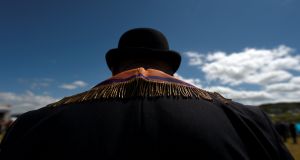 Orangemen gathered for a dress rehearsal over the weekend, known as the ‘Mini Twelfth’. Photograph: Clodagh Kilcoyne/Reuters 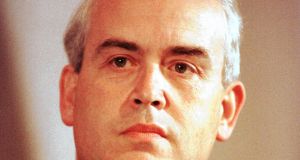 The fields around the quaint Co Armagh village of Richhill are usually quiet, bar the sounds of farmers at work, but they will today host the world ’s largest gathering of Orangemen for the Twelfth celebrations.

Five thousand marchers and band members will gather, along with an expected crowd of 25,000 – all enlivened by the recent political tumult that has put the Democratic Unionist Party centre-stage in Westminster politics.

Last Friday, Orangemen gathered for a dress rehearsal in Lurgan, known locally as the ‘Mini Twelfth’, where bandsmen and lodge members from the greater Craigavon area fine-tuned their routines before Richhill.

Lurgan is evenly split between Protestants and Catholics. Some parts of the Armagh town are home to near-ubiquitous GAA and Celtic insignia, before they give way to Union Jack bunting and orange flags on the way from the train station up to the main street.

The Lurgan marching route has its own history: “All those houses south of the church would have been Protestant-owned houses,” explains Denis Watson, Grand Master of the Armagh County Lodge.

During the Troubles, however, many Protestants moved out: “It’s now nearly all nationalist. So where previously we would have gone down as far as the railway station and turned around and come back up.”

In the 1990s, Watson, as master of the Royal Black Institution’s Lurgan chapter, was a prominent figure during the most difficult years of the Drumcree parades conflict in the 1990s, when Orangemen in Portadown were stopped from walking back from the church.

Watson, who served as a member of the Stormont Assembly for Upper Bann between 1998 and 2003, last walked down Garvaghy Road wearing his orange sash in 1994. It was, he remembers, “not a very pleasant experience then”.

Watson is still hopeful that a “resolution” can be reached so that he and his fellow brethren can once again pass the Drumcree parish church, where Orangemen continue to hold a weekly protest, and walk down the Garvaghy Road.

However, the veteran Grand Master is realistic in his assessment that no amount of leverage now enjoyed by the DUP in Westminster will solve an impasse which he says requires cross-community respect and toleration.

As such, he is dismissive of the recent overture made by Portadown Loyal Orange Lodge district grand master Darryl Hewitt to DUP MPs, who insists that the Portadown lodge had tried to talk, but that now it is “time to walk”.

Honouring tradition, Friday night’s Lurgan parade began at the sprawling Brownlow estate which was bequeathed to the Order by the Brownlow family who arrived as Protestant planters in the 17th Century.

Said to be the largest Orange hall in the world, Brownlow is home to a museum that chronicles the 1912 Ulster Covenant, the Great War, along with the service of of local brethren in the RUC and the staunchly unionist Glenavon Football Club.

Curator Clive Higginson winces at mention of the word “sectarianism”, but he is open about the Order’s Protestant-only philosophy: “The Orange Order is a Protestant organisation, so that means you’re sectarian then by definition.

“It sounds like a dirty word as if a finger is being pointed at you, but it’s made up of Protestant people and if you want to put that title on it, then it’s fine,” Higginson tells The Irish Times candidly.

Questioned about the Conservatives/DUP deal, Stevie Gregson of Lurgan’s Britannia Loyal Orange Lodge 24 has little fear of direct rule from London from Conservatives dependent upon the DUP .

“On a personal level I voted No for the [Good Friday] Agreement, I didn’t think that the republican movement had come far enough in terms of eschewing their terrorist past. Things have developed a lot since then of course,” he went on.

Distrust of Sinn Féin is evident at among the Brownlow crowds. Gregson regards its calls for a Border poll with barely concealed contempt: “There are many on the nationalist side who would not vote for a united Ireland, ” he says.

Talks between Sinn Féin and the Orange Order are dismissed disdainfully by Denis Watson: “Sinn Féin-IRA have made no apologies whatsoever for all their misdemeanours, all the genocide that they created on the Protestant community.

“Until there’s an open apology and we see a genuineness from them that they’re genuine about being apologetic for what we’ve gone through I can’t see there being any dialogue with Sinn Féin, full-stop,” he says.

Watson and many fellow Orangemen are at pains to offer a sincere and genuine welcome to nationalist neighbours, though others gathered in Lurgan hold stronger views, evidenced by derogatory references to the Pope and “Taigs”.

“I’m uncomfortable with it. If you look at this parade tonight you will not see any evidence of paramilitary flags or organisations. It’s not something that the organisation that I belong to supports in any shape or form. Terrorism is terrorism, always has been and always will be,” he says.

This year, it was the turn of Lurgan Purple Star LOL 63 to unveil a new banner, which saw its lodge secretary Nigel Dennison happy to bask in the approval of his fellow brethren, if uncomfortable to talk about politics.

Nevertheless, Dennison allowed himself a small indulgence when asked if he is hopeful, or expectant of preferential treatment for the Order now that the DUP holds sway in Westminster. “Expectant,” he said cryptically, with a knowing smile.