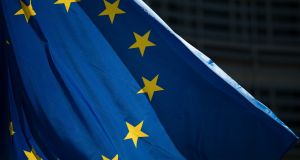 Ireland should consider leaving the EU according to a British think tank. Photographer: Jasper Juinen/Bloomberg

Ireland should give “serious consideration” to following Britain out of the EU, a right-leaning UK think tank said.

The State could opt to remain with the UK in a customs and free trade area, while negotiating as favourable as possible trade and investment terms with the remaining 26 member states, Policy Exchange added.

Former taoiseach Enda Kenny firmly rejected any suggestion that Ireland should leave the EU, saying the foundation of Ireland’s prosperity and the bedrock of its modern society was membership of the European Union.

But this report by the influential British research organisation said: “In the circumstances, Ireland must give serious consideration to other options, including Irexit.”

The document was drawn up by Ray Bassett, a former Irish diplomat and commentator.

“Whatever the outcome of the Brexit negotiations, there will be a price to pay. For Ireland, there is really no upside to Brexit,” it said.

“The question to be raised is what price is Ireland willing to pay to stand in solidarity with the remaining 26 EU countries?

“If the Irish Government is willing to pay that price, will the Dáil, and possibly the population in a referendum, be equally willing to do so?”

- Access to the Single Market need not be synonymous with full EU membership.

- The EU is facing “huge problems” and its future direction is unlikely to be in Ireland’s interests.

- The DUP’s central role in Brexit negotiations as part of its relationship with the Tories should facilitate strong cooperation across Ireland.

It said: “Simply sitting on the sidelines and allowing the EU to negotiate for Ireland is essentially untenable.

“The first duty of the EU negotiators is to act on behalf of the European Union as an institution.

“This is prioritised in their guidelines, approved by the European Council.

“The type of deal that Ireland’s interests requires, however, including free trade with the UK, is directly in contradiction with the Union negotiators mandate that anything relating to Ireland and her border which emerges from the Brexit negotiations, must ‘maintain the integrity the Union’s legal order’, ie, no exceptions to the customs union.”

The consensus in Ireland favours remaining in the EU.

A recent poll suggested that 88 per cent of Irish people think Ireland should stay in the EU.