State to purchase a number of items from Yeats Family Collection 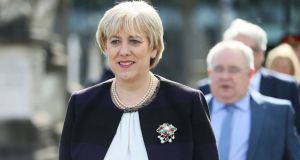 A letter with 80 signatories was published in The Irish Times this week urging the Minister for Culture Heather Humphreys to intervene before the sale. Photograph: Brian Lawless/PA Wire

The State has agreed to purchase a number of significant items from the Yeats Family Collection, due to be auctioned today.

The Irish Times understands the Minister for Arts Heather Humphreys has provided funding to the National Museum of Ireland and the National Library of Ireland to buy a number of the items.

The department provided the money but the two institutions have chosen what should be purchased by the State. Government sources stressed discussions had been under way for some time and denied it was a last-minute intervention.

The source said the department had a long-standing position of not commenting in advance of auctions but had been working with the two institutions to resolve the issue.

The collection comes from Cliff House, Coliemore Road, Dalkey, Co Dublin, which is the former house of poet WB Yeats’s son the late Michael Yeats, a Fianna Fáil senator and MEP, who died in 2007, and his wife Gráinne, a harpist, who died in 2013. It is being sold by their three children who live abroad.

The paintings, letters and personal effects of the family have a combined top valuation of £1.9 million (€2.1 million).

A letter with 80 signatories was published in The Irish Times this week urging the Minister to intervene before the sale. Signatories include scholars Lucy McDiarmid, Enda Longley, Nicholas Grene and Terence Brown along with a number of Irish writers, academics and artists.

The letter said the collection is “much more than just a family collection” and “illuminates the very making of modern Ireland a century ago”.

Fianna Fáil had also called for Ms Humphreys to take action ahead of the sale.

The auction is due to begin on Wednesday but the items purchased by the State have been removed.