Deportations at the rate of 1,200 daily 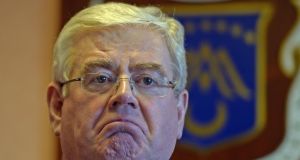 The United States is deporting about 1,200 people every day, Tánaiste Eamon Gilmore told the Dáil, but he said it was accepted that there had to be legislation on immigration reform in that country.

Mr Gilmore, speaking during his last foreign affairs questions time as leader of the Labour Party, said it was “far more a case now of when rather than if there will be immigration legislation in the US”.

Responding to questions on the possibility of securing legal status for the 50,000 undocumented Irish people in the US, he warned however that it was important not to raise expectations unreasonably.

Immigration is a hugely contentious issue in the US, where there are an estimated 11 million undocumented residents. Mr Gilmore warned there was a “further sharpening of political engagement on the issue” because of the number of migrant unaccompanied children seeking to enter the state through Mexico.

“This may now impact negatively on the prospects for wider immigration reform progress being achieved over the immediate period ahead,” he said.

He said part of the difficulty was that no matter what US president Barack Obama proposed, an element of the House of Representatives would oppose it.

Mr Gilmore said the Bill passed by the US Senate would provide a path to legalisation for the undocumented Irish and make an E3 visa available to 10,000 Irish people a year to travel and work legally in the US. There was no agreement, however, on the Bill in the lower house but the Tánaiste said the people he had spoken to during a visit to Washington last month “accept that immigration legislation will be passed by Congress at some stage”.

Fianna Fáil foreign affairs spokesman Brendan Smith said it was his understanding that “immigrant-rich cities are very much in favour of the legislation, whereas the parts of the US that have had little immigration over the years are where the greatest opposition is articulated”.

Mr Gilmore said the 11 million undocumented people were in effect integrated into the US community. “There are people who have been there 20 or 30 years with children who are US citizens but yet are themselves liable to be deported.”

Sable kept as pet in Co Cork found to have rabies-like virus 10:45
Bodies of three young children found in house in Dublin 10:17
Boy (17) dies and three others injured in Dublin car crash 09:42
Election 2020: FF and FG trade insults on tax policy, Brexit 06:57
‘Men like Seamus Mallon don’t come along too often’ 02:05
SUBSCRIBER ONLY