Unit of alcohol should cost €1 – the same as litre of milk, says liver disease expert 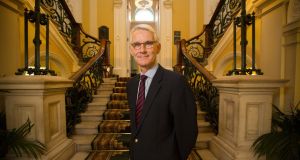 Professor Frank Murray, president of the Royal College of Physicians Ireland, believes tackling the pricing and availability of alcohol is the most effective way to deal with overconsumption. Picture by Fergal Phillips.

The minimum price of a unit of alcohol should be the same as a litre of milk at €1, a liver specialist at Beaumont Hospital has recommended.

Prof Frank Murray has also called for a reduction in the number of retail outlets selling alcohol and for restrictions on advertising and labelling of alcohol products.

A recent Glasgow study showed the risk of dying from cirrhosis due to alcohol was directly related to the number of off-licences in an area, he said.

Describing drinking in Ireland as a crisis, he said “tackling price and availability of alcohol is the most effective way to change our relationship with alcohol”.

Prof Murray, president of the Royal College of Physicians Ireland and a member of the college’s policy group on alcohol, said “minimum unit pricing is the single most important aspect” of recently published legislation.

In relation to The Public Health (Alcohol) Bill, which provides for minimum unit pricing, Prof Murray told the Oireachtas Health committee: “We support the setting of a minimum unit price for alcohol of at least €1 per unit, the same price as a litre of milk. We believe it needs to be set at around this price to be effective.”

Debate on price quickly turns to the cost of a bottle of wine, he said.

France and Italy, which are major wine producers, “have managed to dramatically reduce alcohol consumption in recent years at a time when the amount of alcohol being consumed in Ireland has been rapidly rising. Italy used to drink about twice what we drink as a nation per capita, and now drinks less than half.”

Prof Murray said research in the British Medical Journal debunked the notion about a drink “being good for us”. It showed “drinking alcohol is of no benefit to anyone in terms of health”.

Sinn Féin health spokesman Caoimhghín Ó Caoláin said that minimum pricing would have a more serious impact on those who were least well-off in communities than those who “can better afford the more expensive choices when they visit the off-licence”.