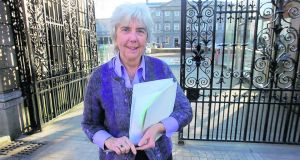 Lap-dancing clubs benefit from the reduced 9 per cent VAT rate for the tourism and hospitality sector, it emerged during the Dáil debate on the budget.

Independent TD Maureen O’Sullivan questioned the application of the rate for the sector, which she said “did some strong lobbying on this”.

The Dublin Central TD said she had submitted parliamentary questions and “I was intrigued to discover that lap-dancing clubs also benefit from the 9 per cent rate”.

Questioning why lap-dancing clubs received this benefit, she said: “I suppose it depends on one’s interpretation of what constitutes hospitality, but I feel the rate could have been increased in some areas.”

‘Comfortable’
She said businesses, investors and “those who are comfortable” had benefited in the budget. The Minister for Agriculture had “listed the benefits and grants on the way for farmers. I look at low-income families in the constituency I represent and wonder what benefits there are for them in the budget.”

She said there were no benefits for them, “indicating the basic unfairness and inequality of the budget”.

Statistics showed “on the grand scale” the recovery was well under way but “it is not filtering down to many individuals, families and communities. For them austerity continues.”

Socialist Party TD Joe Higgins said budget attacks against the young and elderly reflected Fine Gael’s austerity agenda. “ ‘Die off’ is the callous message to the elderly – ‘you are an inconvenience.’ ”

“ ‘Get out of the country’ is the callous message to the youth, ‘we have no place for you here because our policies are failing’,” he said.

Independent TD John Halligan asked the Taoiseach what he would say “to a mother caring for three sick children twenty-four-seven, 365 days a year, who can claim carer’s allowance for only two of them? She wants to know why she only qualifies to have two disabled people in her home, and she cannot cope with the thought of another review of her medical card.”

Rate of interest
Tánaiste Eamon Gilmore said the budget required €600 million less in cuts and taxes “because this Government renegotiated the rate of interest on the programme loans”.

“Fianna Fáil just want people to forget the past and ignore the reality that the difficulties of the last six years were brought down on the heads of the Irish people by their cosy cartel of bankers, property developers and political insiders,” he said.

Fine Gael TD Terence Flanagan criticised as a “token measure” the 10 cent increase in the price of a packet of 20 cigarettes. “Much more must be done to discourage young people, particularly young women, from taking up smoking.”

The Dublin North East TD also hit out at the reduced tax credit on health insurance, which would adversely affect older people and lead younger people to cancel their policies, he believed.

Minister for Education Ruairí Quinn said his budget had been cut by €236 million to €8.219 billion for 2014, but most of these savings would come from the Haddington Road agreement.