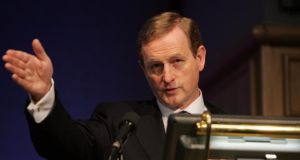 Taoiseach Enda Kenny: promised that during his term in office he would increase total employment by 100,000. Photograph: Cyril Byrne

There is a consensus among many of the political correspondents that Enda Kenny has had a good year in office, that exiting the bailout will be almost a triumph, that aside from the obvious ministerial dunces, the Ministers in the key departments have fared well, implicitly that the Government is doing fine in difficult conditions.

Enda Kenny’s signal achievement, according to this consensus, has been to drive the Abortion Bill through the Dáil and Seanad, with only minimal casualties among his backbenchers. Apparently, it doesn’t matter that Enda Kenny repeatedly promised he would not legislate for abortion; that his party’s director of elections in 2011 promised, on behalf of the party, that Fine Gael would not legislate for abortion; that votes were sought and almost certainly obtained on these promises; and that TDs and Senators who insisted on adhering to their party’s promises were railroaded out of the parliamentary party. And yet this flagrant breach of election promises, worsened by the double duplicity of penalising those who wanted to keep their and their party’s word, is deemed admirable!

In a “wide-ranging” and “exclusive” interview with one correspondent recently Enda Kenny was facilitated to expand again on yet another Cabinet jobs announcement, promising this time to take 75,000 off the dole queues. He promised in the Fine Gael manifesto of 2011 that his party would increase total employment by 100,000 in its five-year term of government. The reality is that, half-way through the Government’s term, there has been no net increase in full-time jobs whatever. There were 1,401,800 in the full-time work force in the first quarter of 2011 and in the first quarter of 2013 there are 1,391,000, according to the latest Quarterly National Household Survey.

In that 2011 election manifesto, Fine Gael held out the prospect of forcing senior bondholders to take a hit on their loans to the broken Irish banks. This didn’t happen. Instead there has been a deferral of €30 billion of the debt, which is welcome, but the country still owes that debt and there is no evidence that at any stage Enda Kenny or his Government ever pressed to force senior bondholders to take a hit.

The reality is that the national debt has hit a precarious level – 120 per cent of GDP this year. And that ignores what are known as “off balance sheet” debts for guaranteed bank borrowings, Nama borrowings and underfunded pension liabilities.

Enda Kenny expects Ireland to exit the bailout programme next January. He told the MacGill Summer School 10 days ago: “That will be an important moment for our country for many reasons, not least because to be a real republic, Ireland must be a sovereign republic”. The sovereign republic was forfeited in the series of EU treaties that Fine Gael supported vigorously, while exiting the bailout may be worse than the bailout.

The social costs of this crisis are enormous and this Government has made them appreciably worse – to what degree will not be apparent for some time. The net outward migration of Irish nationals was 26,000 in this Government’s first year in office, in comparison with 22,400 for the previous year. The total net outward migration of Irish nationals was 34,400, the worst since 2008. We don’t know the cost of the crisis in terms of poverty and deprivation for the full period since this Government came to office but there is little reason to believe it is not worse than was recorded for 2011, its first year.

According to the Survey on Income and Living Conditions (SILC), in 2011 16 per cent of the population were living on incomes of €10,899 or below, and almost a quarter of the population (24.5 per cent) experienced two or more types of enforced deprivation (such as going without heating during the previous year because of insufficient income). Almost certainly this is now worse. According to data provided by the Revenue Commissioners, 54 per cent of earners live on incomes of less than €30,000 and they have an average income of less than €15,000. Over 100,000 earners get an average of €108,736 per annum and pay, on average, just 26 per cent on income tax.

According to SILC, the equivalised disposable income per household (this gives a weight of 1 to the first adult, 0.6 to each other adult [ie persons over 14] and 0.33 to each child under 14) is €21,400, which makes us among the richest in the world. The problem is more one of income and wealth distribution than of austerity itself. But the media, the political establishment and the “leaders of opinion” – all with a vested interest in inequality – propound that equality, or even just a little less inequality, are impossible.

Meanwhile the “have-nots” have less, while the “haves” remain at most just mildly inconvenienced. That is Enda Kenny’s real success.

2 Is Ireland ready for the Covid-19 vaccine?