Taoiseach: Investment must come before pay increases at Irish Rail 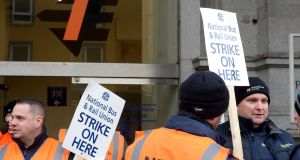 Investment in Irish Rail must come before pay increases for staff, Taoiseach Leo Varadkar has told the Dáil.

“I think the consensus in this House is that while there should be some form of pay increase, the priority must be investment in infrastructure,” he said as the second of five scheduled days of industrial action in a pay dispute at the State-owned firm took place.

Rejecting Opposition criticism of the Government’s handling of the dispute, Mr Varadkar claimed there was a real contradiction in the positions of Fianna Fáil and Sinn Féin.

Both parties wanted investment in the railways to make them safer and provide better services, he said. Yet, there was a demand for pay increases substantially above what was being paid to other people in the public and private sector.

“There cannot be both,” he added.

Sinn Féin leader Gerry Adams said the Taoiseach should “step in” and ensure the workers’ very reasonable demands were met as a matter of urgency.

He said Minister for Transport Shane Ross should do his job, adding that he was paid many, many times more than any Irish Rail worker.

Mr Varadkar said Mr Ross had briefed the Cabinet on the issue at its meeting earlier. He said the manner of a Government intervention in the industrial dispute was through the State mechanisms available.

Fianna Fáil leader Micheál Martin said the workers had not had a pay increase in 10 years and did not want to be on the picket line.

He said the origins of the dispute lay in a lack of proactivity on the part of the Government and Mr Ross on transport policy in general and in terms of investment in the railway system.