Gerry Adams insists ‘republicans did admit their involvement’ in 1975 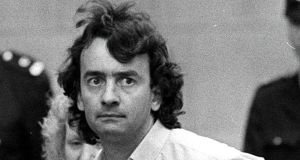 Sinn Féin leader Gerry Adams was urged by Taoiseach Enda Kenny to use his IRA contacts and help reveal those responsible for the bombing of pubs in Guildford, Surrey, in 1974.

Mr Kenny was responding to tributes paid by Mr Adams to the late Gerry Conlon, who had been wrongly jailed for the bombing. Mr Adams said Gerry Conlon, his father Giuseppe, who died in prison, Paul Hill, Carole Richardson and Paddy Armstrong were the victims of a grave miscarriage of justice.

“As is well known, Gerry, on his release, spent his time working for other victims of justice,’’ Mr Adams added. “I extend solidarity and my condolences to his sisters and entire family circle.’’

Mr Kenny said he had never met Gerry Conlon, but he sympathised with his extended family on his death.

“I did, however, meet Paul Hill who said on Sunday that those who spoke about Gerry Conlon should look in the mirror and ask themselves some questions,’’ he added.

“Perhaps one legacy from the tragic past . . . is that those who know the truth, even after the death of Gerry Conlon, might come forward and say we were responsible, we were guilty, we were under orders.’’

In a statement later, Mr Adams accused the Taoiseach of claiming republicans had contributed to the miscarriage of justice. “The truth is that in December 1975, the four IRA volunteers who became known as the Balcombe Street unit were arrested,’’ he said. “Within 24 hours of their arrest, they told senior British police officers that they, and not the four people who had been recently convicted, later to become known as the Guildford Four, were involved in the bombings.’’

He said the Guildford Four were granted an appeal in October 1977 on the strength of legal statements given by the Balcombe Street unit.

“The response of the British judicial system was to keep them in prison for another 10 years,” Mr Adams said.