Coveney thanks emergency services, praises ‘professionalism that resulted in no loss of life’ 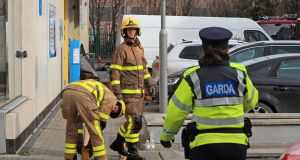 Members of Dublin Fire Brigade and gardaí at the scene of the fire at the Metro Hotel, Ballymun, Dublin, on Thursday morning. Photograph: Colin Keegan/Collins Dublin

There will be a “very extensive investigation” into Wednesday night’s major fire at the Metro Hotel in Ballymun, north Dublin, Tánaiste Simon Coveney has said.

“We will come back to this issue when we have more clarity in terms of what happened, and why,’’ he added.

Speaking in the Dáil on Thursday, Mr Coveney thanked the emergency services called to the scene of the fire.

He said there were 11 units of Dublin Fire Brigade, eight fire engines, two aerial appliances and the incident command unit, comprising of 60 firefighters, involved in managing the blaze.

“I think the professionalism that resulted in no loss of life should be recognised in this House,’’ he added.

He said 150 people had been evacuated from the building and nobody was injured, adding it could have been a very different and tragic scene in other circumstances.