The Together for Yes group which represents over 70 organisations who are advocating a Yes vote in the upcoming referendum on the Eighth Amendment have officially launched their campaign in Dublin city centre. Video: Bryan O'Brien 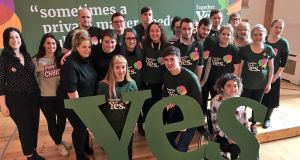 Members of the Students4Ch8ice group, part of the Union of Students in Ireland, at the official Together4Yes campaign launch to remove Article 40.3.3 of the Constitution. Photograph: Students4Ch8ice/Twitter

Campaigners advocating repeal of the Eighth Amendment of the Constitution have insisted they will accept and respect the result of the referendum.

The Together4Yes group officially launched its campaign to remove Article 40.3.3 of the Constitution and insisted it wanted to be part of a fact-based, honest and respectful debate.

More than 70 organisations including the National Women’s Council, Rape Crisis Network Ireland, Women’s Aid, the Irish Family Planning Association, the Union of Students in Ireland, the Well Woman Centre and One Family have pledged their support.

Together4Yes director Ailbhe Smyth said the campaign would be focused on care, compassion and change.

Asked how the group would appeal to people who are undecided about the proposition, Ms Smyth said: “We will be focusing a great deal on people who still have questions and reservations.

“It is important and it is our job to give them the information they need to actually make up their mind. Once people have the information in their heads, they are saying it makes sense that women who have been raped can access abortion.”

The group says it is civic-led and will not align itself with any political party. However, it says it will work very closely with any like-minded politicians who want to do so on the issue of the State’s abortion laws.

The group has begun to roll out campaign literature but it makes no reference to the proposition to allow for terminations up to 12 weeks into a pregnancy, as proposed by the Government.

Orla O’Connor, a director of Together4Yes, said it was committed to campaigning in line with the Government proposals.

“What we will be saying in the campaign is we have to have change, we have to have removal of the Eighth Amendment, and that it is really important that we provide abortion in that range of circumstances,” she said.

“The vast majority of abortions take place within less than 12 weeks and we need to be able to support the women who have, up until now, had to leave their country. We want that care to be provided in Ireland.”

With regard to funding, the group said it had limited resources for its campaign but was hopeful it could raise €500,000 through events and donations.

The campaign directors were questioned about the comments of Minister for Social Protection Regina Doherty, who suggested those in favour of repeal will not accept a No vote in the referendum.

Ms O’Connor said the group’s focus was on securing a Yes vote but she insisted there was no truth to the contention that it would not accept the result it was working to avoid.

“Absolutely not, we are Together4Yes, we are about getting people out there now for the next eight-and-a-half weeks, that’s our focus,” she added.

The group will now hold regional launches across the State and will begin canvassing for support over the next number of weeks.