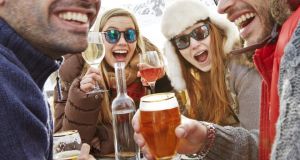 “There is no point in implementing legislation governing the 26 counties which does not involve some type of co-operation or similar legislation in the six counties,” he said.

Mr Wilson, from Cavan, said at times like Christmas and Easter, huge convoys of people travelled from as far away as Cork and Kerry to the North to buy alcohol.

Even with below-cost selling, people would still travel there because it was cheaper.

He called for a major education programme on the danger of alcohol abuse in secondary schools. He added during the late 1970s and 1980s, emphasis was placed on an anti-smoking campaign, which he believed was hugely successful.

“I was part of a class of 28 in secondary school, only one of whom smoked because, from first year to fifth year, we had periodic classes showing us the dangers of smoking.

“If the same approach were taken to teaching our young people, starting in first year of secondary school, about the harm that alcohol abuse can cause, it would be money well worth spending.”

Marc MacSharry of Fianna Fáil said any extra revenue generated by the Government’s proposal should be ring-fenced for suicide prevention and mental health services.

“I am not a killjoy and I do not oppose drinking, but alcohol abuse has gotten out of control in recent years,” he added.

Imelda Henry of Fine Gael said the problem of alcohol abuse was due to availability and price. Cáit Keane of Fine Gael said while the measure had been criticised for not going far enough, one had to start somewhere.