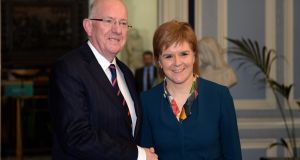 Scotland will unequivocally support an open border for Ireland in the wake of Brexit, its first minister Nicola Sturgeon has told the Seanad.

Ms Sturgeon, the first foreign serving head of government to address the Upper House, said the Scottish government knew and understood how vitally important it was for Ireland to maintain an open border.

“We will support unequivocally an open border here,” she said.

The leader of the Scottish National Party, highlighting the challenges of the vote to leave the EU, said that if the path the UK took “turns out to be deeply damaging” to Scottish interests, its people retained an option to vote for independence.

“To guard against very real possibility that the UK does decide to leave not just the EU but also the single market, we are exploring options that would respect the vote in Scotland and allow us to retain the benefits of the single market, not of course, instead of free trade across the United Kingdom but in addition to it.”

In a wide ranging speech to the Seanad, Ms Sturgeon highlighted the historic, cultural, and economic links between Ireland and Scotland, both countries’ approach to asylum and refugees, and the controversial alcohol legislation and minimum unit pricing, which has been the subject of legal action in Scotland.

She said that Scotland’s experiences in Europe had not been identical to Ireland.

“We are not an independent member state - yet,” she said to some laughter.

“The sense that small countries can be equals in a partnership of many is something that appeals to us about the European Union.

“The basic concept of the EU that independent members co-operate for the common good is generally praiseworthy rather than problematic.”

She said the Brexit vote was deeply unwelcome. “For Scotland and Ireland it creates a challenge which is not of our making, nor of our choosing.”

Following discussions with Taoiseach Enda Kenny and Minister for Foreign Affairs Charlie Flanagan, she said it was clear from both discussions Brexit was the greatest foreign policy challenge since Ireland joined the EU.

“For Scotland we know how we and how the UK as a whole responds to the EU vote will define us for generations to come.”

She said Scotland believed that the UK as a whole should seek continued membership of the European single market and the European customs union.

“After all, 48 per cent of voters in UK chose to remain in the EU, so did two of the four nations in the UK,” she added.

“Many people who campaigned to leave were clear in their view that doing so did not mean leaving the single market.”

She said both Ireland and Scotland had shown an open approach to the plight of asylum seekers and refugees and that Scotland had accepted one third of all the Syrian refugees arriving in the UK.

With similar histories of emigration in Ireland and Scotland, she said it would be a denial of both countries’ identity if they chose not to assist and by showing an openness to refugees “we are repaying the obligations of our past”.

During a question and answer session after her speech, and responses from Senators, who supported Scottish independence, Ms Sturgeon said the best way Ireland could help Scotland was to “just keep doing what you have done - understanding Scotland’s position and holding out the hand of friendship”.

Asked by Taoiseach’s nominee Senator Marie Louise O’Donnell, when she would set the date for an independence referendum, Ms Sturgeon said “I’m not going to answer that question”.