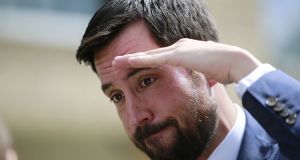 Minister for Housing Eoghan Murphy accused the Bill’s sponsor, Sinn Féin, of ‘hypocrisy’ for blocking housing projects in their own constituency. File photograph: The Irish Times

A three-year rent freeze could be law by Christmas if all Opposition parties co-operated to deal with the legislation, Sinn Féin’s housing spokesman Eoin Ó Broin has claimed.

Mr Ó Broin was speaking in the Dáil as he introduced his Rent Freeze (Fair Rent) Bill which provides for a refundable tax credit of up to €1,500 to every person in private rental accommodation and a three-year freeze on rent.

The Dublin Mid-West TD said the measure could cost the exchequer €260 million but he said it would be money well spent.

“This is an emergency measure intended to ease the pressure on renters and give Government some time to address the issue of supply,” he said.

But Minister for Housing Eoghan Murphy rejected the Bill as unconstitutional and reckless and said all the evidence showed that in other countries where this had been tried it had cut the supply of housing with reliable landlords leaving the sector.

And he asked “is the Sinn Féin tail wagging the Fianna Fáil dog again”? Has the party changed its mind from rejecting the freeze to supporting it.

Mr Murphy also hit out at Sinn Féin TDs, accusing them of “hypocrisy” for blocking housing projects in their own constituency.

He asked “where is the evidence this won’t cause more harm, mean a loss of supply or harm tenants”.

Fianna Fáil has said it will support the second stage or introductory debate on the Bill, co-sponsored by the party’s new Dublin Mid-West TD Mark Ward.

A formal vote on the Bill takes place on Thursday which is expected to pass comfortably. Mr Ó Broin acknowledged that opposition parties had some difficulties with the Bill.

But he said his party would “work constructively with all parties to iron out any potential difficulties” and there was “no reason this legislation could not pass before the end of the year”.

Mr Ó Broin said the Government supported landlords and offered even greater tax breaks to vulture funds but the tax credit would put a month’s rent back in every renter’s pocket.

Mr Murphy insisted however that “we cannot support this Bill. All of the evidence tells us that it actually will damage supply. That’s exactly what’s happening in other cities that tried this same measure. We also know this Bill is unconstitutional and if Fianna Fáil had bothered to read it they would have seen that immediately.”

The Minister said “we recognise that rents are unsustainably high” but he said the rent controls in place are working.

“I know a rent freeze sounds good for someone who is renting,” he said. But he warned that they were still dealing with legacy issues of the recession and they needed responsible tax policies as he highlighted the €260 million cost of the measure.

Fianna Fáil housing spokesman Darragh O’Brien said entire generations risk being permanently locked into a rental trap, when they wanted to own their own homes.

He said that rents had soared by 87 per cent and on the other side house prices are unaffordable and were being snapped up by cuckoo funds.

Mr O’Brien said his party supported measures to help tenants break free from the “suffocating rent trap” that takes up to 50 per cent of workers’ income.

FG and FF back transition payment for persons retiring before to right to State pension 00:10
Lobby to press politicians over referendum on right to home 00:05
Irish Times poll: Large majority want change of government 23:33
Animal welfare group raises concern over live exports 22:25
Two men questioned about attack where man was set on fire 22:01
SUBSCRIBER ONLY