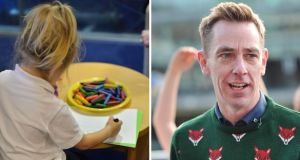 Ryan Tubridy was at the SVP Christmas appeal where he expressed his disgust at 4,000 homeless children: ‘It is not right and it is not fair.’ File photograph: Alan Betson/The Irish Times

Escalating rents are increasing demands for the services of the Society of St Vincent de Paul (SVP) despite the improving economy, the charity has stated.

The SVP annual Christmas appeal has been launched to fund its busiest time of year.

SVP national president Kieran Stafford said rising rents are pushing people who would otherwise be able to cope into poverty.

“There are 110,000 working poor in Ireland. There are a lot of people struggling even though they are in work,” he said.

“The rise in rents is putting so many people into poverty. We see situations where parents are going without meals themselves so that they can provide for their kids and pay the rent.

“The rent is the one thing that people will prioritise because you have to keep the roof over your head. People are juggling. They are robbing Peter to pay Paul. It is all the more shocking for it to be happening in 2019 in a modern western country.”

He said the “most shameful statistic” was the 10,000 people who were homeless including 4,000 children.

The emphasis in this year’s Christmas appeal will be on the one-in-three calls to the SVP from people without enough food.

SVP will be trialling its “tap to donate” contactless card machines during its church gate collection day on Sunday, December 8th.

The society will also have a banner on the front of Liberty Hall in Dublin emphasising the number of people in Ireland who still go hungry despite a long period of economic growth.

Why is Ryan Tubridy dismayed?

Speaking at the launch, broadcaster Ryan Tubridy said Irish people had a “great decency” about them which he believes goes back to the famine. “We have an innate kindness about us that is nearly genetic.”

He contrasted that with the “terrible sense of indecency” at “certain levels” which has led to 4,000 children living in accommodation they should not be living in.

“It is not right and it is not fair. I thought we would evolve as a people to stop that. There are 4,000 children who will wake up between now and Christmas and wonder if Santa will come,” he said.

“We have to ask ourselves, how are the 4,000 people in this class of accommodation in 2019 on this small island? I don’t know the answer, but all we can do is give a damn.”

Mr Tubridy said many of those who come to St Vincent de Paul have “hit a wall” through no fault of their own. “They get a hand up not a hand out.”