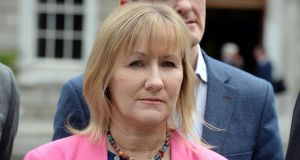 Sinn Fein TD Imelda Munster was told the Office of Government Procurement does not collect data on tenders awarded, projects completed on time and whether they were completed at expected costs. Photograph: Cyril Byrn

Public money was spent in an “absolute scamble” for supplies as Covid-19 hit Ireland last year, the Public Accounts Committee has been told.

The committee was hearing from senior civil servants in the Department of Public Expenditure and Reform (DPER) on the functioning of the Office of Government Procurement.

Asked about the purchase of ventilators for €14 million from a company previously only known for organising Middle Eastern conferences, Paul Quinn - the chief procurement officer - told the committee that “in the times that were there, the market forces were very, very different”.

“My strong recollection of where things were at, in and around that time, is that there was an absolute scramble, not only in Ireland but across the world to produce necessary supplies,” he said.

“The normal good functioning of public procurement, in terms of how it operates and particularly the due digilgence aspects, had to be examined as the balance of risk and the balance of speed played out,” Mr Quinn said. “I think there will be lessons learned in relation to it.”

The contract, with a company called Roqu, has previously been discussed in the Dáil, where it was said that the counterparty was a company with a residential apartment address in Dublin and one employee, the owner of the company, Robert Quirke.

Mr Quinn was also pressed about the availability of Personal Protective Equipment, and the security of supplies going forward. He said that an internal government group was created to examine this question, but it was yet to report to the Government. Potential solutions, he said, could include indigineous producers and stockpiling. He argued that last spring, “not only was Ireland in challenging circumstances, but other countries within Europea and across the world found themselves in similar circumstances”.

The committee also heard criticism of the record keeping and statistical analysis undertaken by the OGP of Government spending, from Sinn Féin TDs Imelda Munster and Matt Carthy. Ms Munster was told the OGP does not collect data on tenders awarded, projects completed on time, whether they were completed at expected costs and whether dispute resolution mechanisms were relied on by Government bodies involved in the contracts.

The committee was told that while the OGP provides frameworks for contracts, and says it has saved the State hundreds of millions of euros since inception by doing so, it does not police contracts itself, while other parts of the Department gather information on some sectors, such as construction.

“I’m struggling to find the point of the OGP, in terms of the information we’ve learned,” Mr Carthy said. David Moloney, the acting secretary general of the Department, said that individual accounting officers in state bodies and Government departments have responsibility for contracts.

The OGP said that it would not reject out of hand the use of the controversial two-stage contract procedure used in the National Children’s Hospital (NCH) procurement. The construction of that project has been bogged down in time and cost overruns, and disputes with the main contractor, BAM. The two-stage contract process, which involves splitting the project into different phases and tendering to complete before designs were finalised, has been blamed for cost overruns at the project.

While Mr Quinn said it was an “unusual” approach in the context of Irish projects, “to sayin and of itself (it) is necessarily a bad approach would be incorrect in that there may be circumstances where it does need to be used because it may be really difficult to ascertain the full costs without doing certain works in advance”.

He told Catherine Murphy TD, co-leader of the Social Democrats, that there were a “range of factors” behind the cost escalation at the NCH, and that there “has been no finding that the use of the two-stage process alone caused the escalation in relation to costs”.

The meeting also heard calls from Fianna Fáil TD for Sligo-Roscommon, Marc MacSharry, to examinee whether contracts with stockbrokers could be severed after fines were applied to such operators by the Central Bank. The state procures services on a range of functions from Davy, which was given a fine of over €4 million by the Central Bank today.

“There’s been some developments in terms of stockbroking today nationally in terms of the Central Bank applying fines and so on, and if we are in a contract with them, what options have we got to sever such contracts or examine the implications of what occurred today,” Mr MacSharry said.

The officials were also asked about procurement issues around the estimated grades provider used for last year’s Leaving Cert exam, Polymetrika, and ViraPro, which sold hand sanitiser to the State that was later recalled on safety grounds.

Mr Quinn said these were issues for the Department of Education and Skills, but that speaking generally, while there are possibilities under procurement law to exclude companies who have not performed in their contracts, it “has to be proven and acted upon by the public bodies, it can’t be on the basis of conjecture or statement or assertion”.