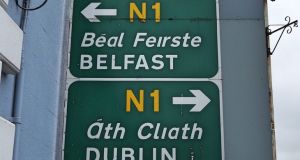 The minister said engagement between the PSNI and An Garda Síochána was happening quickly and in most cases significantly faster than the minimum standard required between EU states. Photograph: iStock

Brexit has had “no impact” on cross-Border co-operation on law enforcement, a UK government minister has said.

Mr Walker acknowleged the concerns that North-South co-operation on policing and security would be affected by Brexit, but said that due to the Trade and Co-operation Agreement between the UK and the EU it was a case of “so far so good, and that’s to be welcomed”.

The feedback was that the arrangements in place were “working well”, he said, and the UK government would continue to discuss with the Irish Government what could be done “to support this and potentially take it further,” adding that there was an opportunity for “further co-operation in due course.”

The minister answered questions from MPs around extradition arrangements and cross-Border data sharing, and said that engagement between the PSNI and An Garda Síochána was happening quickly and in most cases significantly faster than the minimum standard required between EU states.

“Exchanging information continues to work very effectively and in a timely manner,” he said, adding that from his perspective this was “not something which has changed.”

Asked by the committee chair, the Conservative MP Simon Hoare, if drug traffickers and other criminals had had their operations significantly disrupted by the inspections and paperwork needed for goods coming from Britain to Northern Ireland, Mr Walker said it was “important to recognise that there have always been pressures, and [WILL]always be a degree of criminality which will seek to adapt to the circumstances.”

He said part of the intelligence sharing in place on a cross-Border basis was about “having those conversations” so that any change or adaptation by criminal networks could be identified and targeted.

“But of course it is unlikely ... that someone who is committing a crime and smuggling illegal substances is going to be deterred by having to fill out a form,” he said.

“I don’t think having any burdens and bureaucracy on parcels would actually help to deal with the criminal issues, I think it’s important that we make sure that goods can flow as they have done but also that we target the policing to where problems arise.”

The East Derry MP Gregory Campbell questioned the low number of cases of cross-border fuel launderers being prosecuted each year, which he said could be counted on the fingers of one hand.

The NIO’s political director, Mark Larmour, said there had been recent successes tackling launderers. “Crime gangs are very agile, it is important that police on both sides of the border and agencies such as HMRC are able to move quickly to get ahead of them,” he said.

In May 2020 three men were arrested in Co Armagh after tobacco worth £3m in lost revenue was seized and eight million cigarettes seized in a joint Garda and PSNI operation.

Gardaí also carried out seven searches of business premises and homes in the Carlingford area of Co Louth and seized items including €100,000 euro in cash, tobacco, equipment used in the manufacture of tobacco products, and mobile fuel-laundering machinery.