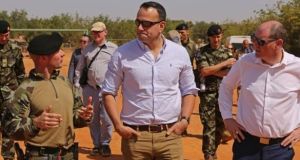 The United Nations mission in Mali is the type of challenge for which the Army Ranger Wing trains every day, Minister of State for Defence Paul Kehoe said as he sought Dáil agreement for a deployment of 14 soldiers to join 50 other countries serving there.

Fianna Fáil supports the move but Sinn Féin, Labour and a number of smaller parties and Independents oppose the mission on the grounds that it had a security-only focus rather than finding a road map to peace.

The Minister said the members of the Army Ranger Wing “have the necessary skillsets and are trained and equipped to operate in hostile environments such as Mali”.

The ranger wing is the special operations unit of the Defence Forces.

For a UN deployment there must be the “triple lock approval” of UN authorisation, Government approval and the support of the Dáil.

The Minister acknowledged they “can never eliminate the significant threats that exist in a dangerous mission in these significant conflict zones with adversaries associated with ISIS and al-Qaeda”.

But he said the decision to deploy the Army Ranger Wing involved a significant in-depth assessment and review by both civilian and military authorities.

The team “will engage daily with the local population as part of its intelligence and information gathering remit” but would have substantial security in place for protection. The deployment will be on four and six month rotations and the Government has committed to a 24-month involvement.

Fianna Fáil defence spokesman Jack Chambers said his party supported the deployment but he said the existing UN resolution on the Mali deployment expires in a week-and-a-half.

“The fact that we are voting on a resolution that has yet to be passed by the UN is unusual in the context of the triple lock and its integrity.”

He asked why Ireland was engaging at this time and why there was an opening for the ranger wing now when there was none previously.

He said France and the UN Security Council said they were there to stop international terrorism and to put down risings, but he said this was a “peace enforcement mission” which involved taking sides and was “breaching everything for which neutrality stands”.

He said it also undermined “the proud tradition of Irish soldiers who have served abroad in defending peace when it has been established”.

He added: “There is no peace in Mali. If there was, the French battalions would not be sending in drones to attack villages and the like.”

Labour defence spokesman Brendan Ryan said his party opposed the deployment because it was not “consistent with our support for human rights and for peace and reconciliation”.

They were concerned that the mission was a “security-only solution to the conflict. The only end game that seems to be envisaged is one where insurgent groups are defeated.”

He said it was a dangerous precedent that pulled the UN away from its traditional stance of neutrality into being a strong supporter of one side, “if not an active party on one side of the conflict”.

Mr Ryan said “Labour cannot support Irish participation in Minusma due to the lack of focus on peace-building and reconciliation. Too much of this mission is focused on combatting insurgents rather than finding a roadmap to peace.”