Ruth Morrissey’s €2.1m award will ‘not be affected’ by appeal 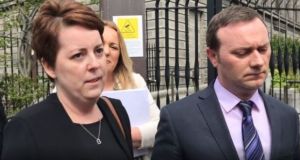 It is the State’s “absolute intention” to assure a woman terminally ill with cervical cancer that her family’s €2.1 million court settlement be fully protected regardless of the outcome of a Supreme Court appeal.

Taoiseach Leo Varadkar said he did not wish to discuss individual cases in the Dáil but talks were ongoing between representatives of Ruth Morrissey and lawyers for the State about the protection of the payment she and her husband Paul were awarded in the High Court over the CervicalCheck screening controversy.

He also said the State had to join the Supreme Court appeal because of the concerns of doctors, scientists and cancer specialists about the test of absolute confidence.

Mr Varadkar said they could not ignore doctors “saying it could undermine our screening programmes and could lead to more false positives and unnecessary biopsies, perhaps even unnecessary hysterectomies and mastectomies”.

He also said legislation for a tribunal to operate as an alternative to court had been approved by Cabinet as well as the amount in ex gratia payments to be paid to the 221 women or their families, who had been affected by the scandal.

Sinn Féin leader Mary Lou McDonald asked why Ms Morrissey only heard about the decision to appeal the case in the media and she asked for a guarantee that Ms Morrissey’s award “is secure and indemnified”.

The Taoiseach said State counsel had contacted Ms Morrissey’s counsel last Thursday and Friday, before the story appeared in the paper.

He said “it is absolutely the intention of the State to give Ms Morrissey and her husband an assurance that no matter what happens as a consequence of any appeal, her settlement will be fully protected and that she will have the assurance that money will be there for her and her family”.

He said the appeal was inevitable because the laboratories had decided to appeal.

He told Fianna Fáil leader Micheál Martin that “I was wrong at the time” when last year he said he believed it would be possible to settle all of the cervical cancer cases through mediation and negotiation.

He said he “did not understand” that in some situations the facts and the issue of negligence would be disputed and “I was wrong at the time”. He said many but not all cases had been settled by mediation and negotiation.

Mr Martin said the Taoiseach made a commitment in May that the Government would offer mediation in every case linked to the cervical cancer controversy so women could avoid having to go to court and the trauma of a court hearing.

He added that when asked if the US laboratory at the centre of the scandal wanted to fight the case Mr Varadkar said that the State would settle and pursue the lab later.

He said that the commitment “is not being honoured in the context of the Government deciding to appeal this case to the Supreme Court” regardless of the mechanisms being developed.

But he said the tribunal to determine cases of women affected by the controversy would also be adversarial and was being criticised for being “akin to a court session in private as opposed to one in public”.

The Taoiseach said that a year ago he believed it would be possible to settle all of these cases by mediation and negotiation but he was wrong about that because he did not understand that negligence and facts would be disputed in some situations.