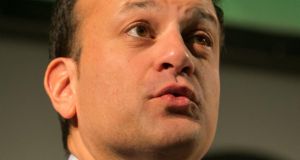 Taoiseach Leo Varadkar: says Ireland will not be only country to miss targets. Photograph: Gareth Chaney/Collins

Multinational companies such as Apple are moving projects abroad because they can see Ireland is not serious about climate change, Green Party leader Eamon Ryan has claimed in the Dáil.

Highlighting a report stating that Ireland is the worst in Europe for climate action and 49th out of 60 countries examined by three nongovernmental organisations (NGOs), Mr Ryan said “Ireland has been shamed globally”.

He said the State had no ambition to increase renewable power between now and 2030, but “we could easily go to 75 per cent renewable and start putting us up the international league table”.

He accused Taoiseach Leo Varadkar of doing nothing, telling him: “You’re spending a fortune on Irish and green branding but you’re doing nothing about it in reality.

“You can only sell yourself as a green country for so long before the reality comes home.”

The Taoiseach pointed out that the 2018 Climate Change Performance Index report had only just come out and he had not had a chance to read it. He said it was a ranking assessment published by three NGOs, an unofficial report and had no status other than as a commentary on individual countries’ climate policies.

He said it gave no information on the basis for the rankings and he said Ireland had been very upfront about missing emissions targets.

The Government had been constrained by lack of investment over the previous 10 years because of the extremely challenging nature of the targets themselves, he said.

Mr Varadkar added that Ireland now expected to miss the 2030 targets but would not be alone among EU member states.

He added that the national planning framework goes against major sprawl and favoured population growth up to 50 per cent in cities such as Limerick, which would encourage more sustainable growth.