Miriam Lord: Enda’s fix for shoddy building is in the works 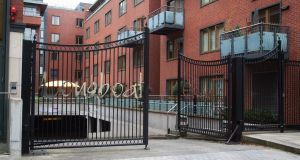 The Longboat Quay apartment complex in Dublin’s docklands, built by Bernard McNamara. Residents face a possible evacuation or a bill of €4 million for fire safety works in the building. Photograph: Gareth Chaney/Collins

When the shiny new development went up on the banks of the Liffey a decade ago, its name seemed an appropriate nod to Dublin’s rich Viking past.

But for real authenticity, Longboat Quay should have been called Lifeboat Quay.

The place is a fire trap.

If the owners of the 298 apartments in the complex can’t come up with €4 million between them, they may have to abandon their homes.

The plight of the residents made its way into Leaders’ Questions in the Dáil on Wednesday, courtesy of Sinn Féin’s Mary Lou McDonald. These people are in a terrible situation; one not of their own making. While the shambles of the Priory Hall complex in north Dublin grabbed the headlines in recent years, the unfolding story of Longboat Quay was also beginning to generate column inches.

After the scandal of Priory Hall, it might have been expected that the authorities would move quickly to sort out this latest tale of shoddy building work wrecking family lives.

In drawing attention to the escalating problems of the residents in the dockland apartment complex, Mary Lou remarked at the outset that it was not a unique situation. And she had two questions for the Taoiseach: where is the legislation to give homeowners the protection they need when something like this happens? And will Enda now “personally intervene with [the developer] Bernard McNamara to ensure he and those responsible for Longboat Quay foot the bill and are held accountable?”

The Taoiseach indicated immediately that he is on top of this particular crisis.

He informed the House that he has read about it.

“Obviously, Deputy McDonald has spoken to someone who actually lives there,” he added.

Take last year, when the homeless situation made headlines with a death just metres from the gates of Leinster House.

In no time, Enda was out having midnight chats with rough sleepers in the doorways around Kildare Street.

Serendipity strikes Enda with remarkable regularity. When some story or other blows and he needs to know the inside track, he invariably meets a woman who tells him all about it. Not so with Longboat Quay and its many residents, who only live a stone’s throw from Kildare Street. It’s most unusual, but he hasn’t bumped into one of them by accident or heard their story of how their homes turned out to be fire hazards.

“This is not the first time this has happened,” observed the Taoiseach. “We recall Priory Hall and the fire

traps that were discovered there, and the difficulties that went on for quite some time, including court cases, before that matter was eventually sorted out.”

Earlier in Leaders’ Questions, the Fianna Fáil leader asked him what he intended to do about crime in rural Ireland, accusing him of being “detached and out of touch”. Micheál Martin said he talked about the problem as if he were an interested bystander, commentating on it from a distance.

The Taoiseach took grave offence at such an allegation and rejected it out of hand. But Mary Lou wasn’t letting him away with expressing how building standards were let slide during the building boom when the other crowd were in charge and how it’s now terribly difficult to make matters right for all the people who suffered.

She told him, more than once, that the developer who built Longboat Quay (the company behind the project went into liquidation and McNamara went bankrupt) “is now debt free and in the property business”. He’s out the other side and back in the game. Will he ask Bernard to sort out the people who may now have to leave their homes if they can’t come up with large amounts of cash to make good the construction defects in their apartments?

Sometimes Enda must despair of his backbenchers. Particular when serious issues, such as almost a thousand people facing down the barrel of homelessness, arise in the Chamber.

McNamara (who is under no obligation to do what Mary Lou asks), when he was a much younger man, once ran for Fianna Fáil in an election. “Is he one of yours, Micheál?” shouted Dinny McGinley, pointing at Timmy Dooley. “Timmy would know. He’s from Clare.”

The Taoiseach said everything that could be done would be done and wasn’t it an awful pity that these building projects weren’t properly supervised at the time.

All that was needed was “a good clerk of works” to spot the shortcomings and the job would have been Oxo.

Enda didn’t commit to “raise the telephone” and intercede with McNamara, nor did he answer Mary Lou’s question about what legislation had been brought in to stop this sort of construction carry-on happening in the future.

Minister for the Environment Alan Kelly has also directed “that a review be undertaken to develop a framework that will apply generally in future cases of this kind”. There will be a “steering group”. Assisted by experts.

“Never mind the review; where is the law?” retorted Mary Lou, in fine form.

Wallace, meanwhile, told us afterwards that he has asked in the House on many occasions for these clerks of works to be reinstated on major construction projects. “They refused.” He added: “A lot of shoddy developments have been built. They just haven’t fallen down yet.”