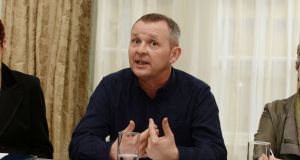 Richard Boyd Barrett said ‘there is a notion abroad that the film industry is exceptional and that the normal rules do not apply to it’. Photograph: Alan Betson / The Irish Times

Film workers who appeared before an Oireachtas committee a year ago to highlight abuses of employees’ rights have been blacklisted by producers in receipt of public money, it has been claimed.

People Before Profit TD Richard Boyd Barrett made the allegation following a meeting with film workers at Ardmore Studios. He called on Minister for Employment Affairs Regina Doherty to investigate “credible and very serious allegations”.

Ms Doherty said she would liaise with Mr Boyd Barrett who wants her to meet the workers who have not been employed since they spoke publicly in January last year.

The Minister said blacklisting “is absolutely against the law. It is not and will not be tolerated.”

Mr Boyd Barrett has previously raised the issue and said public funding should be linked to employees’ terms and conditions.

He said “there is a notion abroad that the film industry is exceptional and that the normal rules do not apply to it”.

“Film producers who are receiving almost €100 million per year in public funding are essentially saying that the legislation does not apply to their industry.”