In Derry, he is being recast in Irish chieftain mould, in keeping with Republican tradition 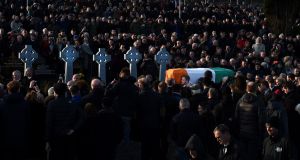 In Derry, the dead keep watch over the living. Perched high on the Creggan hillside, the headstones in the City Cemetery look down over Derry and its landmarks – the River Foyle, the city walls, and the Bogside.

In the last year another monument has been added to their number, a Celtic cross marking the grave of Martin McGuinness.

The butcher boy from the Bogside who became an IRA commander, Sinn Féin politician and Northern Ireland’s deputy first minister now lies overlooking the same streets where he grew up, and where he made his name.

His death, a year ago, was marked by 25,000 mourners in a ceremony described as being as close to a state funeral as Derry has ever seen. In the months since, his presence has been often missed.

One of the last public events McGuinness attended was a service in January 2017 in memory of the dead of Bloody Sunday: “He hugged nearly everybody at the monument,” says Tony Doherty from the Bloody Sunday Trust.

“When we gathered again this January his absence was felt very badly. We were all talking about him not being there,” says Doherty.

In the months since, McGuinness’s son Fiachra has often taken his father’s place – holding his placard at the Republican Easter Commemoration, and opening the new Museum of Free Derry.

His party, too, have ensured that McGuinness snr remains an ever-present influence, invoking his name after election victories and at public events.

In the Diamond, in the centre of the city, a banner bearing his image invites people to sign up for the Chieftain’s Walk – “Siúlóid an Taoisigh” – to Grianan Fort, the former seat of the Kings of Ulster, in his memory.

For McGuinness’s neighbour, the veteran civil rights campaigner and journalist Eamonn McCann, the eulogies paid to the dead leader and his deliberate recasting in the mould of an Irish chieftain are in keeping with a long Republican tradition.

“This is the classic iconography you get from political groups,” he says.

“It is absolutely striking how quickly Sinn Féin began talking about Martin in the way almost that religious people talk about saints.

“Martin is now being raised up by Sinn Féin – and this is being done in a sustained, organised way – as a person who if he was ever involved in violence was involved reluctantly and who delivered peace, so he was a hero of the war and a hero of the peace.”

Much of this sits uneasily with McCann.

“I don’t think he regarded himself as a saint and I wonder would Martin be embarrassed at the tone in which he is spoken about.

“It’s almost devotional, reverential, and I don’t think that’s him.”

Denis Bradley, journalist and former vice-chair of the Police Service of Northern Ireland’s Policing Board, knew McGuinness for almost 50 years.

“There will be those people who will always blame him for being almost the inheritor and maintainer of the IRA campaign, which I don’t think is true,” says Bradley.

“Other people will see him as the greatest politician that ever walked the streets of Ireland, which I don’t think is true either.

“His legacy’s always going to be mixed, and I think he was very realistic about that, but I do think his great legacy was his ability to reach out to Paisley and to Unionism in general.

“I think his engagement with the peace process and with the peace initiative was so intimate to him that he saw it almost as part and parcel of who he was.

“It was part of him and he was part of it, and therefore that reaching out I think was done with great sincerity and great warmth. That’s what he left, and that’s what he has bequeathed to us.”

Presbyterian minister the Reverend David Latimer became friends with McGuinness after his church, overlooking the Bogside, was attacked with paint.

He appealed to McGuinness on local radio “as the only person who could stop it”. A friendship was born – one some of his flock found deeply controversial, not least because members of the congregation had lost loved ones to the IRA.

At Latimer’s mother’s funeral only two weeks ago, a man refused to shake his hand because he had shaken that of McGuinness.

“He didn’t hate. Even though others might have been saying things about him, might have been pointing the finger, might have been reluctant even to be close to him that didn’t affect Martin’s understanding of them or his willingness to continue knocking on their door knowing that was the only way forward.”

This pragmatism, as McCann puts it, was characteristic of McGuinness.

“Martin emerged from the streets, from rioting.

“People like Gerry Adams emerged from history whereas Martin emerged from the present, and there’s a difference in that.”

That connection to the present kept McGuinness rooted to his home, and to his people.

McGuinness’s final act as Deputy First Minister was to trigger the collapse the Stormont Assembly, in January 2017, after the Democratic Unionist Party (DUP) leader Arlene Foster refused to stand down as First Minister pending an inquiry into a botched renewable energy scheme.

More than 12 months on, the prospect of the return of devolved government to the North seems less likely than ever.

“Some senior DUP politicians have said to me, David, if your friend was still with us we’d be back at Stormont now,” says Latimer.

For McCann, this is too simplistic.

“The suggestion that if Paisley and McGuinness were still here, if the Chuckle Brothers were still on the road, that we’d all be in a better place is entirely speculative.

“After all, Paisley was ousted in the end and the institutions which Paisley and McGuinness sustained are gone, and people who say it would all be different if they were still around are attributing far too much to the individuals.”