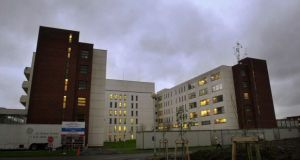 Last weekend at Beaumont Hospital emergency department ‘large numbers of people were sitting side-by-side, many of them waiting there up to 12 hours’, the Dáil was told on Thursday. File photograph: The Irish Times

No social distancing or infection control measures were in place in Beaumont Hospital last weekend when the emergency department waiting room was “packed” with large numbers of people sitting side by side, the Dáil was told.

She said it was an urgent issue where there was a “packed waiting room at Beaumont Hospital last weekend, where large numbers of people were sitting side-by-side, many of them waiting there up to 12 hours”.

Ms Shortall asked Minister for Health Simon Harris what guidance as being given to public hospitals “for the safe management of people waiting for services in emergency departments”.

The Dublin North-West TD said a letter about what happened in the hospital and photographs of the scene had been sent to the Minister and said that “on the one hand hospitals are providing services to Covid patients and on the other hand the non-Covid patients would seem to be placed at risk” because of the failure to implement social distancing rules.

Comparing the hospital situation with other sectors, she said if that situation happened in a shop “the numbers would be reduced drastically.

Mr Harris said he had not yet seen the letter but he wanted the situation in Beaumont to be addressed.

The Minister pointed to the Health and Inspection Quality Authority (Hiqa) report on acute hospital infection prevention and control preparedness, published on Wednesday, and said it was requested by the National Public Health Emergency Team (NPHET).

Because “we cannot talk about everybody else having to manage infection control and not get on top of it in our health service”.

Hiqa said progress had been made in acute hospitals but “it also identifies common challenges across hospitals in relation to access to PPE (personal protective equipment) which will become a bigger issue as we commence more services”.