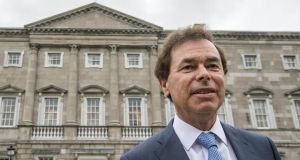 Former justice minister Alan Shatter has launched a blistering attack on Minister for Health Leo Varadkar about his proposals for surrogacy legislation.

He also sharply criticised “seriously watered down” enforcement provisions from the version of the Children and Family Relationships Bill he drafted as minister.

The changes to this Bill removed measures to deal with “obstructive, venomous, hate-filled parents” who destroyed the relationship between the other parent and their children, he said.

Mr Shatter said he was “enormously confused” by the proposals Mr Varadkar announced because they were already included in legislation outlines he drafted last year and had been discussed by the Oireachtas justice committee.

They were, however, excluded from the amended version of the legislation, currently before the Dáil.

The Minister for Health had announced the Cabinet had authorised him to prepare the outline of a Bill for the regulation of assisted reproduction and surrogacy, which will regulate surrogacy and related practices in Ireland for the first time.

He said it would take a few months and would not become law before the general election.

Criticising Mr Varadkar, the former minister said: “I wish he would stop pretending that he is presenting some new crusade to address an issue that no one before he came along was interested in addressing. It’s misleading and it’s unfair to members of the media and those interviewing him who do not have the intimacy of knowledge of both the Bill that was published last January and of this legislation.”

Mr Shatter was speaking during the introductory debate on the amended versions of the Children and Family Relationships Bill. It reforms and updates family law to address the needs of children living in diverse family types.

He said if the surrogacy proposals announced by Mr Varadkar could not be implemented before the general election, this Bill should be amended to address parentage and surrogacy.

The Supreme Court dealing with the case of surrogacy between a husband and wife and her sister had been informed that the issue would be dealt with in the Children and Family Relationships Bill.

When the court was subsequently told this would not happen it urged that legislation be enacted on surrogacy so that another family did not have to go through the same trauma, the former minister said.

There was an “enormous problem where people are estranged and the primary custodial parent who is most often the mother, deliberately obstructing fathers from accessing children, using children as pawns, going to war with fathers, causing some fathers to have nervous breakdowns, destroying relationships deliberately between children and fathers”.

He said “the courts have nothing of practical use they can do where you have the obstinate, obstructive, venomous, hate-filled parent who’s determined to destroy the other parent and the other parent’s relationship”.

His provisions included requiring the “completely recalcitrant parent” in certain circumstances to pay some form of financial compensation, or community service, “some meaningful sanction available to the courts which fall short of imprisoning a parent”.